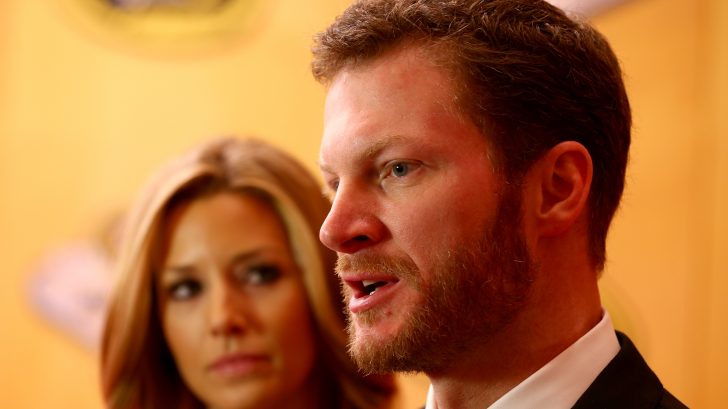 One of NASCAR’s most famous and iconic drivers is opening up in this tell-all interview about a series of secrets he kept from everyone – including his wife.

Dale Earnhardt Jr. was named the most popular driver in NASCAR for 14 consecutive seasons and earned his spot in the upper ranks of drivers after delivering some killer wins and incredible driving over the years.

Now, after retiring in 2017 after several widely-publicized and visible concussions, he’s revealing the secret he kept for years – after being terrified of the effect it would have on his life.

The audio from Dale Earnhardt Jr's car during the crash at Daytona was dramatic. http://t.co/ciKl26LOaM pic.twitter.com/WeETYvXZWP

In this first in-depth interview since his retirement, Dale Jr. sat down with Graham Bensinger for his syndicated sports show that went deep into Dale’s life and revealed a startling confession that many never knew about…including his wife Amy.

Throughout his career in NASCAR, Dale Jr. estimated that he has suffered from more than 20 concussions and many of them went unreported and untreated – something incredibly dangerous to a sports star and something that could have possible medical complications later in life.

While the risks are massive, the fear of losing his entire career in a flash was far more powerful to Dale Jr.

Dale Earnhardt Jr. shares the horrifying thoughts of a NASCAR driver about to crash https://t.co/HAfa3K7hgI pic.twitter.com/S91udyMhye

“I was scared to death,” Earnhardt admitted to Bensinger.

In 2014, Dale Jr. suffered a concussion that was really bad – one that was so bad he was afraid to tell his wife about it, let alone NASCAR.

“You know, any time you have a head injury. Your brain is your computer, you know, and people don’t have the faith in it healing like a broken bone,” he explained to Bensinger. “There’s instances in the past where guys have had head injuries and visually, you can see it’s affected them permanently.”

The longtime racing star continued to explain that once you tell someone about a serious head injury, they often begin to doubt your capabilities after that – and, as Dale says: they start to look for little indicators that you could be deteriorating.

“…You know that person’s always gonna have that in the back of their mind. And when you don’t run a good race, are they gonna go, ‘Hmm, I wonder if he’s just not the same anymore?’”

His own description of the suffering behind a serious head injury is enough to put everyone on notice and make sure that anyone gets the help they need – it’s not something to overlook.

That 2014 concussion is the one that led to his eventual retirement in 2017 – and, he says, with all the advancements NASCAR has made to help drivers, the most harmful still is the driver’s unwillingness to be open.

“Trying to explain this problem to someone who’s never had a concussion or never experienced these problems is really frustrating. Trying to tell even my wife that my eyes aren’t working and this is what they’re doing—it just really builds a ton of frustration inside.”

“I am aware that a driver is their own worst enemy in that scenario. They’re going to do everything they can in that scenario to keep racing, keep their job, [and] not let anyone in on this information and this secret.”

Watch Dale Jr.’s full interview about his career-ending concussion and the 20+ he suffered and the ones he kept secret below.

In advance of his fascinating upcoming book, Dale Earnhardt Jr. tells me about a few major crashes during his NASCAR career, including one that led to his retirement: