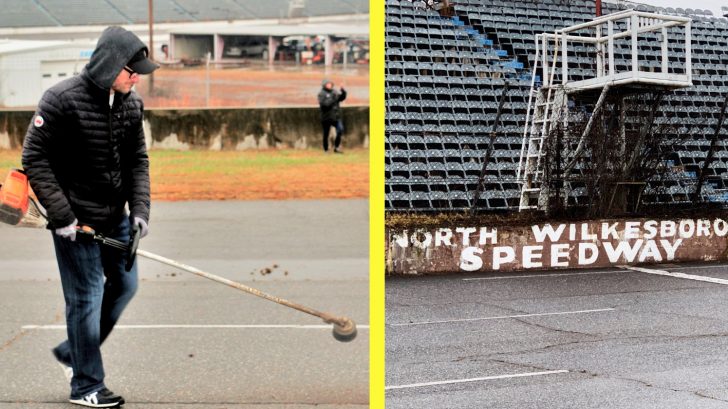 One of the most historic racetracks in NASCAR history has been nearly forgotten about since it was put out of service following a 1996 race. However, with more and more officials, celebrities, and the public talking about a revival – it appears to be ready for a comeback. All it needs is the right person.

North Wilkesboro Speedway was opened at the beginning of NASCAR history in 1947 – only to be closed in 1996 after a final Winston Cup Series race, won by Jeff Gordon.

The track was one of NASCAR’s most unique and featured an uphill backstretch and downhill front-stretch, measuring a total of 0.625 miles, but the roots of this infamous track weren’t initially set in NASCAR, but rather in the early days of Prohibition where it was a dirt oval used by moonshiners to test their liquor cars.

Opened as a dirt raceway in 1947, the iconic France family promoted the first official event as a modified race, and blew the roof off of attendance expectations, reeling in more than three times the crowd they had planned for.

Continuing on as one of the foremost speedways in NASCAR, North Wilkesboro eventually was paved and updated with grandstands and other more modern amenities. It hosted the top series, NASCAR’s Winston Cup for a total of 93 races until its closure in 1996.

The historic track reopened in 2010 for a few smaller Stock Car Series races but shut down in the spring of the following year. When North Wilkesboro Speedway first shut down, it was due to a number of issues including the massive growth of NASCAR as a whole, and the size of the track. Other factors, like economics behind upgrading it with newer amenities and repairs, also factored into the closure.

Now, Dale Jr. and a few others from the NASCAR world joined in to clean up the famous track so that it could be digitized by iRacing for use in simulators, gaming, and other graphical and data-based products. Even though they faced some unfavorable weather during the clean-up the team made quick work of the weeds, debris, and muck that had taken over the once-famous raceway.

Visited North Wilksboro Speedway today to clean the surface for @iracingofficial to scan it and recreate it in the virtual racing world. Even @smyers27 came down from Boston headquarters to supervise. The end result was a super race ready surface and a giant pile of weeds and muck. I am so excited to see this track delivered to the iracing community. Thanks to all who came out to help us. Several friends were there to today. A few, @andyhouston95 @martysnider @c_buescher @myatt_snider @mike_davis88 @sonnylunsford @thetabboyd. Also @marcussmi and his crews from @charlottemotorspeedway and @bmsupdates were on hand. We froze through the rain to get the job finished. Lastly, the medical center was extra creepy.

In a follow up to his posts on social media about the cleanup effort, Dale Jr. also addressed the idea of he and others teaming up to buy the track and possibly return it to its former glory. In a tweet reply, he explains exactly what it would look like if he were an owner of a track.

“If I owned a track. It would be dirt. It would only run street stocks with a claim rule. It’d pay 1k to win. We’d be done racing by 9pm. There’d be a honky tonk bar just outside turn 4 thats open 24/7.”

From the sounds of it, Dale Jr. isn’t necessarily interested in this specific historic track, but it appears he is open to the possibility of owning one!

If I owned a track. It would be dirt. It would only run street stocks with a claim rule. It’d pay 1k to win. We’d be done racing by 9pm. There’d be a honky tonk bar just outside turn 4 thats open 24/7. https://t.co/0WaxlNVp92

What do you think of Dale’s idea of his own track? Let us know in the comments below.