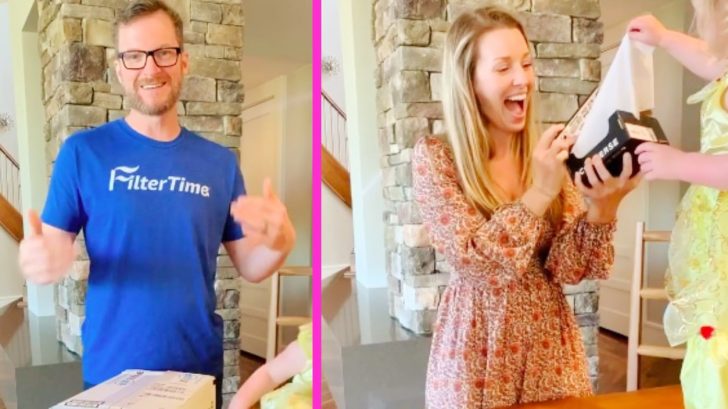 Dale Earnhardt Jr. and his wife, Amy, welcomed their first child in April 2018. Amy gave birth to a baby girl, and the Earnhardts named her Isla.

The couple didn’t post many photos of Isla when she was a baby, but gradually started to share more of her as she grew. It’s clear the little girl is the light of her parents’ lives.

More thankful than ever this Thanksgiving! I’m so grateful for these two and our many blessings. Hope everyone is having a good day with friends and family. ? @kurtisdrums

So when Amy learned she was pregnant with their second child, she knew she had to enlist Isla to help her share the news with her followers.

Amy posted a video on social media that shows Isla proclaiming she’s “gonna be a seester.”

Amy also shared how she told Dale Jr. the news, which she had Isla help her with as well. She dressed Isla in a shirt that read “super amazing sister” and asked Dale Jr. if he noticed it.

Dale Jr. read Isla’s shirt and was in utter disbelief, saying, “What?“

In his overwhelmed state, Dale Jr. got confused, and asked, “How do you know it’s a girl?” Amy chuckled, and pointed out that Isla would still be a sister even if the baby was a boy.

And this is how Dad reacted when I told him a few weeks ago ?

But it turns out Baby Earnhardt #2 is a girl, just as Dale Jr. mistakenly thought!

Since Amy surprised him with the news they were expecting their second child, Dale Jr. planned to surprise her with a gender reveal. He ordered a pair of shoes he had Amy open in front of Isla.

As Amy opened the tiny box containing a pair of Converse sneakers, she was overjoyed to see they were a bright pink! She asked Isla if she knew what that meant, and explained she was going to have a baby sister.

You can watch the touching moment Dale Jr. surprised Amy by tuning in to the clip below.

Congratulations to the Earnhardts! We can’t wait for their baby girl to arrive!