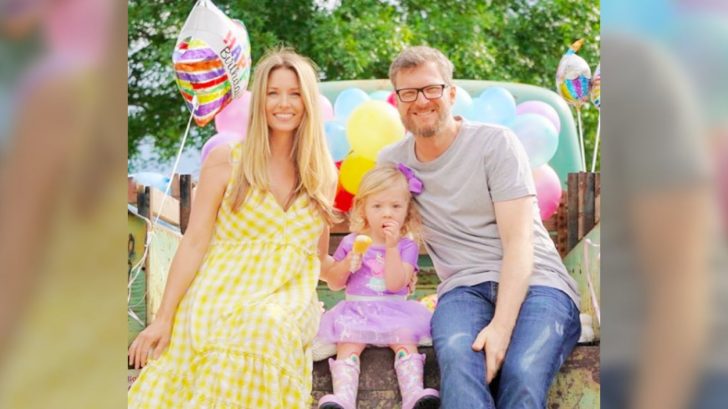 Isla Rose Earnhardt was born on April 30, 2018. The couple initially refrained from sharing photos of their baby girl, and simply announced her birth via short messages on social media.

“She’s finally here!” Amy wrote in her message, while Dale Jr. said he felt “So blessed.”

She’s finally here! @DaleJr and I are officially parents to a beautiful baby girl, Isla Rose Earnhardt. It feels like a dream. The best dream ever. ?

Everyone was right. It’s a new beginning. Now everything I do will be for her and Amy. So blessed. https://t.co/D2U0LxCORN

Dale Jr. and Amy continued to be selective with the photos they shared of Isla, but became more willing to share more of her as she grew. Now, she’s a frequent star on both of her parents’ social media accounts!

She recently appeared in a video Dale Jr. filmed when he put together a surprise gender reveal for Amy. They’re expecting another baby, and Amy surprised Dale Jr. with the news earlier this year.

Since Amy surprised her husband with her pregnancy news, he wanted to have a surprise gender reveal for her. Isla helped him with the surprise, as he had Amy open a shoebox to discover a pair of pink sneakers inside. It’s another girl!

With big sisterhood approaching, Isla is seeming more grown up by the day. Which is fitting, since she just turned two…if y’all can believe it!

“We had a wonderful day celebrating our tiny girl,” Amy wrote on Instagram alongside a slideshow of photos from Isla’s birthday. She said her daughter enjoyed her special day, writing, “Afterward she told me she had a ‘super happy Birthday.‘”

We had a wonderful day celebrating our tiny girl. Happy “I be 2” to you my love! Thank you SO much to all of our friends and family that came to make her day so special. Afterward she told me she had a “super happy Birthday” ??

Because of current circumstances, Dale Jr. and Amy weren’t able to have their friends and family over to celebrate Isla’s birthday this year. So instead, Amy got ahold of their loved ones and had them drive by the home in a parade in honor of Isla turning two.

Isla was amazed at the sight of all of the cars, which were decked out in balloons and other decorations. In a video Dale Jr. posted of the parade, she can be heard exclaiming “wow” and “my goodness.”

“Our friends brought their A GAME,” Dale Jr. said in the caption to the video he shared of the parade. You can catch that video below.

Dale Jr. said his heart was “full” after seeing Isla’s loved ones parade by their house for her birthday. You too, will feel a sense of joy when you see just how mesmerized Isla was by her birthday parade.

We hope Isla had a wonderful second birthday!

What an unexpected amazing thing I saw today. It’s our little girls birthday. So my incredible wife thought to have a birthday parade for her since a gathering was out of the question. Our friends brought their A GAME. Listen to Isla. “Wow” “My goodness” She said what we all felt. My heart is full.