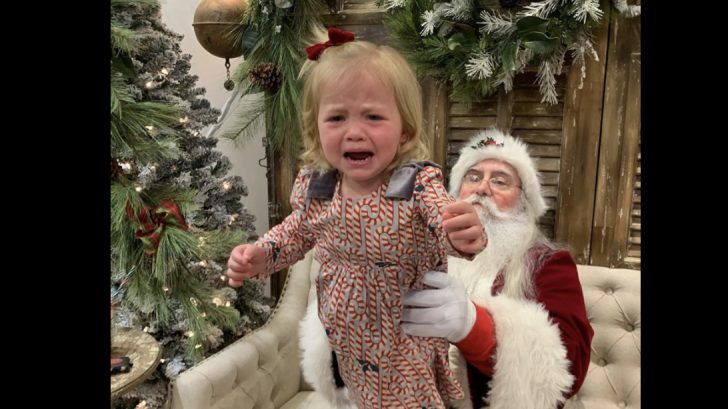 ‘Tis the season for Santa Claus meetings gone awry. And thanks to parents and cell phones, those meetings are sure to be captured and shared for all to see.

Earlier this week, NASCAR legend Dale Earnhardt Jr. and his wife Amy took their 19-month-old daughter, Isla, to meet Santa at a boutique near their North Carolina home. But, the meeting didn’t exactly go as planned as little Isla wasn’t as impressed with St. Nick as her parents had hoped she would be.

Dale and Amy shared adorable photos of the meeting on Instagram, with Amy sharing a clip of the moment they tried to set Isla on Santa’s lap. In one photo, shared by Dale, the whole family poses with Santa. Dale and Amy sit on either side of the man in red and an unimpressed Isla giving Santa a stare from the safety of her mom’s lap.

A video clip shared by Amy captured the moment Amy tried to hand Isla off to Santa for a quick photo. But, the toddler wanted nothing to do with Santa and started kicking and crying almost immediately. The meeting made for a laugh-worthy photo that we’re sure little Isla will appreciate when she’s older.

Isla Rose is the first and only child of Dale and Amy who will be celebrating their 3rd wedding anniversary on New Year’s Eve. The couple started dating in 2009 and got engaged in June of 2015.