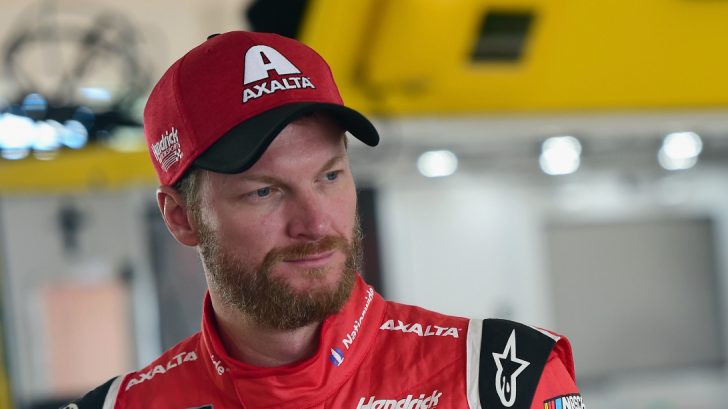 Whether you believe in the paranormal or not, Dale Earnhardt Jr.’s recollection of a chilling encounter he had following a fiery crash on the race track might just make you a believer.

The now-retired NASCAR driver recalled the story in 2018 on his weekly podcast, the Dale Jr. Download, after being asked by a fan if he had ever had an encounter with the supernatural. Earnhardt made it clear that he believes in paranormal activity, but that he doesn’t believe he’s ever seen a spirit or ghost with his own eyes.

After some encouragement from his friend and co-host, Mike Davis, Earnhardt clarified his last statement by saying that he may not have ever seen a spirit or ghost, but he has most certainly felt one, and he claims that it possibly saved his life.

In 2004, Earnhardt was racing behind the wheel of a Corvette at Sonoma Raceway when he crashed and his car burst into flames. He made it out of the car, but has very vivid memories of someone else pulling him out even though video shows that he was very much alone.

“When I wrecked in the Corvette in 2004 at Sonoma…it caught fire…somebody pulled me out of that car. And I thought that it was a corner worker because I felt somebody put their hands under my armpits and pull me out of the car. I didn’t get out. I don’t have any memory of myself climbing out of the car. And I remember sort of moving like in motion going to lean forward and try to climb out of the car, and then something grabbed me under the armpits, pulled me up over the door bars and then let go of me,” Earnhardt recalled.

“And I fell to the ground, and there’s pictures of me laying on the ground next to the car. I know that when I got to the hospital, I was like, ‘Who pulled me out of the car? I gotta say thanks to this person,’ because it was a hand! It was physical hands grabbing me! I felt it. And there was nobody there.”

Despite the video evidence and eye-witness accounts that he was obviously alone on the track that day, Earnhardt firmly believes that someone pulled him out of that fiery crash.

In an interview with 60 Minutes in 2013, Dale Jr. took the story one step farther by claiming that his late father was perhaps the one that helped his get out of the burning wreckage.

The experience is one that has stuck with Dale Jr. and is likely to for a long time. “It…freaks me out today just talking about it. It just gives me chills,” Earnhardt Jr. said.

Dale Earnhardt Sr. died in 2001 following a crash at the 43rd Daytona 500. Earnhardt, nicknamed The Intimidator, was driving his famous black No. 3 Chevrolet when he collided with another car and crashed into a wall. After being cut out of his car, the driver was taken to a hospital where he was pronounced dead of head injuries. He was 49.

Dale Earnhardt’s namesake has spoken often about his dad’s death and their relationship. In September 2018, Dale Jr. revealed one thing that helped him have peace about his father’s death…a letter he wrote to and shared with his dad before he died. Hear Dale Jr. talk about that letter and returning to the Daytona racetrack for the first time after his dad died.

Listen to Dale Earnhart Jr. tell the story about his ghostly encounter on his most recent podcast, Texas Terry, by clicking here. Watch Earnhardt’s frightening 2004 crash in the video below.