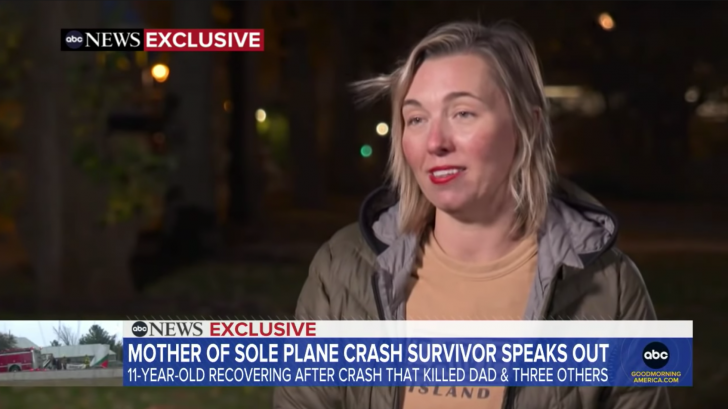 A heroic but very sad incident unfolded recently when a father was said to have saved his daughter’s life in a plane crash by shielding her with a hug and his own body.

11-year-old Laney was the only survivor of the plane crash that was carrying her father and three others on Saturday. The incident took place at the Welke Airport on Beaver Island in the far northern part of Lake Michigan.

According to Laney’s mom, Gio Benitez, told ABC News, “Her last memory is her dad just grabbed her and held her really, really tight,”

Local officials said that Laney only suffered injuries on one side of her body and it was believed that she was saved on the her other side of her body because of her father’s “big, bear hugs.”

Laney is currently recovering at the children’s hospital in Grand Rapids, Michigan.

Gio said Laney “is such a trouper. She has five broken bones all over the place, but she is amazing and she’s inspiring.”

The Federal Aviation Administration (FAA) said that the Island Airways aircraft departed from Charlevoix, Michigan and traveled just 32 miles, and was attempting to land at the Welke Airport when the crash happened.

A Coast Guard Great Lakes helicopter crew happened to be training in the area when the crash took place and they received the emergency call about the crash.

When they arrived on the scene, Laney was critically injured, along with an adult male who initially survived the crash, but was later pronounced dead after arriving at the hospital.

The emergency rescue crew team performed chest compressions on Laney on her way to the children’s hospital to keep her alive.

It’s “such a tragedy and such a miracle,” Gio said about her daughter surviving, despite the fact that her husband, Mike, did not.

Local authorities and the FAA and National Transportation Safety Board are currently investigating the situation to figure out what exactly went wrong.

Here More On The Incident In The Video Below