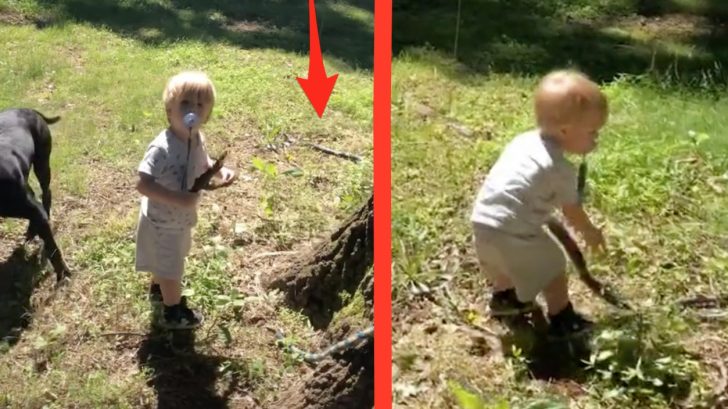 Tik-Toker Kevin Mettler shared a video of his son unexpectedly picking up a snake in the backyard as they were playing fetch with the dog.

The video starts off showing Kevin’s son Asher, who is in his toddler years, holding up a little wish-boned-shaped stick to throw to the family dog who is eagerly waiting for it. Asher gives it a good hurl and the pup takes off running after the stick.

Kevin filmed as the dog picked the stick up and took off running across the yard. He pans the camera back around to see his son picking up what appears to be a Southern black racer snake, which is a non-venomous Coluber constrictor species of snake found in the Southeastern United States.

Realizing what’s going on, Kevin franticly lunged toward Asher right as the snake began to curl up and go on the defensive. He grabbed the snake and tossed it in the grass a few feet away from them.

The dog runs right up to the snake to inspect it and it coils back up in striking position. At this point, the camera turns off but Kevin lets us know in writing on the video that he let the snake go. Fortunately, it appeared nobody got hurt and they will ultimately have a great story to tell the family for years to come and a video to prove it.