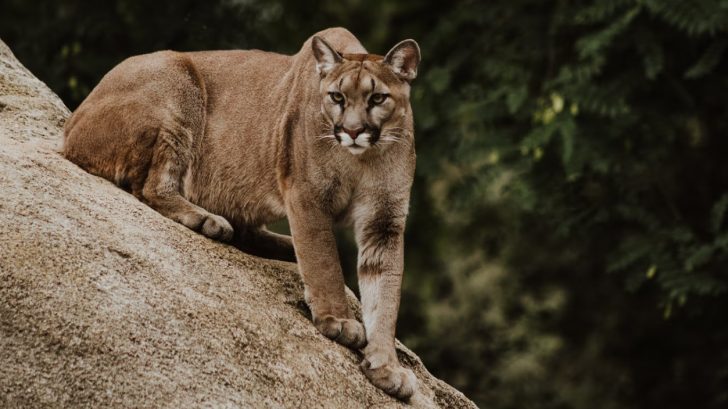 69-year-old Ian Orser from British Columbia recently got into a fight with a mountain lion after he spotted the feline dragging his daughter’s dog across the driveway in an attempt to eat it for dinner.

Ian, a plumber, told Campbell River Mirror he was working on a job site in a residential neighborhood (April 9) while his 40-year-old daughter, Megan Orser, was tagging along with her three dogs.

While he was working, they heard a loud growling and screeching noise and at first, he thought it was just the dogs fighting.

However, Megan went to see what was causing the commotion and saw the mountain lion grabbing a hold of her dog, Red, a nine-year-old female Ridgeback-German Shepherd mix.

The big cat had its jaws locked around Red’s head and was dragging her across the driveway, so Megan let out a big scream that alerted her father the dog was getting attacked.

“Number one, I was worried about the dog,” Ian told Global News. “And, of course, my daughter is there, so if it’s a cougar, it’s pretty scary.”

Ian said he wasn’t scared at the time and just ran straight up to the big cat and kicked it in the head. He kicked it multiple times and it finally let go and it backed off the dog, but it didn’t run away.

“He looked at me, he didn’t attack me or anything,” Ian said. “I grabbed a stick and started shaking the stick around, beating the ground, looking as big as I could, and he sort of sauntered away.”

He then grabbed Red and collected the other dogs in the truck and drove straight to a veterinarian in town.

The dog had multiple puncture wounds on her back, neck, chest, and two legs that required around 20 stitches, followed by antibiotics, painkillers, and a $400 medical bill.

Wildlife authorities with the B.C. Conservation Officer Service said they were able to track down the mountain lion and actually killed the big cat so it wouldn’t attack pets again. They said it was an emaciated male in “pretty rough shape.”

Fortunately, Red is recovering back to full health, and looking back on the incident, Ian said he probably should not have put himself in such a dangerous situation, but at the time all he was thinking, “I just had to save our dog.”