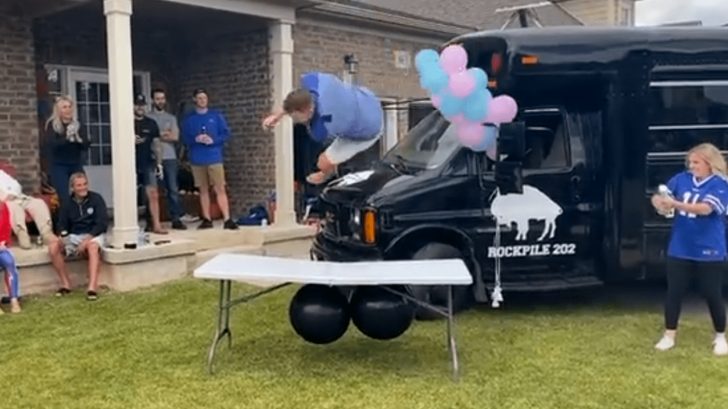 Bradley Gelber, a writer for USA Today SMG’s The Bills Wire, shared a video of some Buffalo Bills fans throwing a gender reveal party in the only way a die-hard knows how…by jumping off a party bus and through a table.

The family had a whole bunch of people, maybe 30 or more standing in the front yard surrounding a husband and wife about to reveal their baby’s gender.

Everyone stood in a circle around them both watching as the dad climbed on top of the hood of the party bus parked in the front yard.

As family and friends held their phones and cameras up ready to film, the dad jumped high into the air in the most epic elbow-dropping pose and dived straight for the table.

Underneath the table were two big balloons filled up with colored smoke that had the color that was going to reveal the baby’s gender.

He landed right on the table, snapping it in half and blue smoke went flying everywhere. The excited mother jumped for joy as her husband rolled off the table and they both met for a hug that involved picking her up.

Everyone cheered in joy for the new baby that was on its way and you could tell they were all used to partying on this level. Many of them had Buffalo Bill’s clothing on showing their comradery for their team.

Watch Footage Of The Hilarious Reveal Below