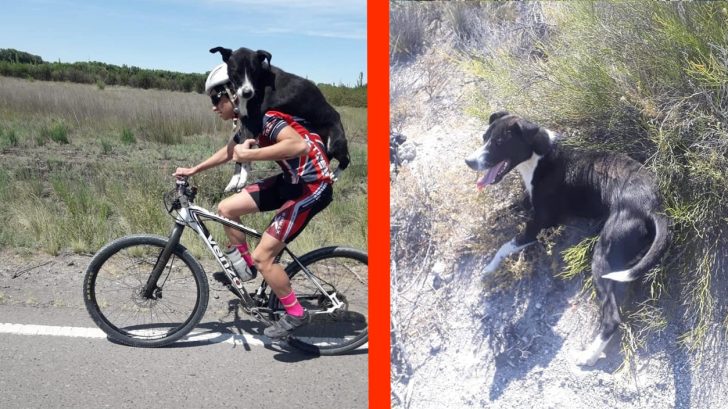 A bicyclist biking around Rio Negro, Argentina became a local and online superhero when he rescued a disoriented and dehydrated dog laying in the middle of nowhere, near a hot summer road.

The good samaritan found the dog far away from civilization while he was training with his friends and he gave the dog some water, but felt sorry for it because he could tell it was weak and needed to be back in town around people. The dog must have been out in the wilderness for a long time because it looked exhausted.

Instead of leaving the dog to fend for himself, he interrupted his training to grab the poor pup and placed it on his shoulders to carry it as he rode his bike. The two reportedly biked for miles until they reached the nearest town and he left the dog there.

One of the friends filmed a video of the dog being carried and that video ended up being published on Facebook by Marican Team. The post identified Rodri as the guy who carried the slouched over dog with its tongue hanging out as Rodri held on to its front two legs.

The Facebook post said “Rodri, Alan, and Emiliano from Villa Regina during their training assisted an abandoned puppy that was dehydrated, hydrated him and brought him closer to the urban area.”

We can only imagine what it must have been like for the dog, to get carried like that all the way to the nearest town. Do you think it realized it was being rescued?