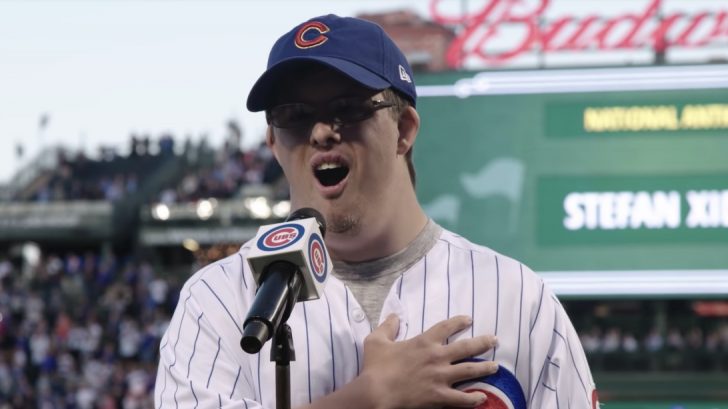 Lifelong Chicago Cubs fan Stefan Xidas had one wish: to sing the national anthem at Wrigley Field. In September 2018, that dream came true.

Xidas, who has down syndrome, wrote a letter to Cubs’ owner Tom Ricketts and it included a special challenge. Xidas asked Ricketts for the honor of singing the national anthem if he could raise $5,000 for the Special Olympics.

“If Tom isn’t able to make this happen, I will still be donating the money to the Special Olympics. This is an organization that is helping so many people like myself. I really love and appreciate the work that they do,” Xidas said.

But, Tom did make it happen. Not only did he accept Xidas’s challenge, but the Chicago Cubs agreed to match whatever funds Xidas was able to raise.

It’s #backtoschool this week for many of our Unified Champion School students! This school year, we want to encourage you to #ChooseToInclude! Send us your selfies with a new classmate & tag #UnifiedGeneration!

Xidas set up a GoFundMe page and got to work. With the help of local news outlets, word spread of the 30-year old’s mission and within two weeks, Xidas had more than doubled his goal by raising nearly $12,000. Even after performing, fans continued donating to the cause and he has raised near $40,000 for the cause.

On September 10, 2018, Xidas’s long-time dream came true when he stood behind the mic at Wrigley Field and sang the national anthem. Dressed in full Chicago Cubs gear, Stefan confidently stood on the grass and delivered a pitch-perfect rendition of “The Star-Spangled Banner” in front of 40,000 fans. His inspiring performance spread through social media.

A great story. Chicago Cubs fan Stefan Xidas, who has Down syndrome, raised nearly $40,000 for the Special Olympics in Illinois. So the team granted his wish and let him come and sing the national anthem at Monday night's game. And he was amazing!https://t.co/cLUJDD27SO pic.twitter.com/OQ0fiDJuGx

Watch Stefan Xidas sing the national anthem in the video below.