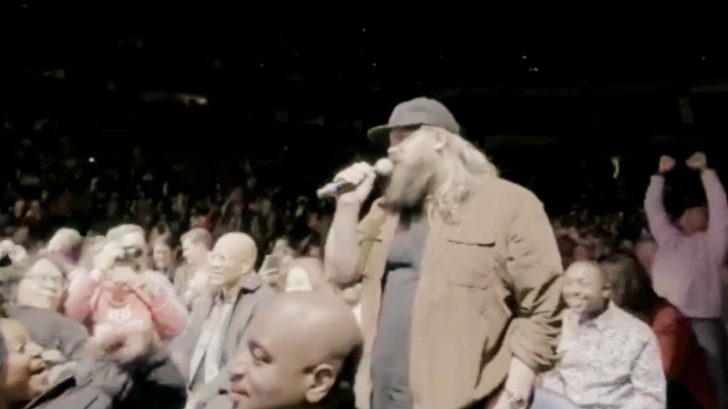 In February 2020, Actor and comedian Tyler Perry was on his Madea’s Farewell Play Tour. The tour started in 2019 and continued into the following year, taking Perry all over the country.

Although the tour took him to Tennessee in 2019, Perry didn’t make his way to Nashville until 2020. He hosted a show in the city’s Bridgestone Arena on Valentine’s Day (February 14).

About to start a show for Madea’s Farewell Tour. First time there’s ever been a theatrical play in the @BrdgstoneArena & over 10k of you showed up! Thank you Nashville! Y’all know how to send an old lady out in style! Here we come Augusta for the last 4 shows!#MadeasFarewellTour pic.twitter.com/4RKvFwjFum

With the show taking place in Music City, it only made sense for Perry to have a musical guest help him out while he was there.

But the crowd was oblivious as to who that guest was, or the fact he was even in the house, until he stood up and started singing. Mid-show, a man with a long beard stood up in the middle of the audience and surprised everyone when he engaged in a duet with Perry.

But that man wasn’t just an everyday fella who decided to interrupt Perry’s show. It was none other than Chris Stapleton!

Stapleton donned a ball cap to try and remain undercover while he sat in the audience and watched Perry’s play. Then, at just the right moment, he got up out of his chair and began singing his signature song, “Tennessee Whiskey.”

To say the crowd went wild would be an understatement. They screamed, as none of them could believe that Stapleton was standing right there singing “Tennessee Whiskey.”

Multiple attendees caught the surprise performance on camera, including a YouTube user named Funky Dyneva. In the video’s description, they wrote, “The 10,000 fans at the Bridgestone Arena enjoyed a surprise duet by Madea and Chris Stapleton!”

That’s a lot of people to hide a surprise performance from, but Stapleton managed to pull it off!

Perry later went on to share his own video of Stapleton’s surprise performance. He thanked him for taking part in the show, writing, “…he KILLED IT!! Thank you Chris, blessings to you, your wife, and them babies!!”

Catch that video the Perry shared by scrolling down below.You can see the looks of surprise on the audience members’ faces as Stapleton sings!

Madea could not come to the end of the farewell tour and have @ChrisStapleton in the audience in Nashville, Tennessee and not have him sing a verse of Tennessee Whiskey! And he KILLED IT!! Thank you Chris, blessings to you, your wife, and them babies!! #MadeasFarewellTour pic.twitter.com/6h16DTNr0S