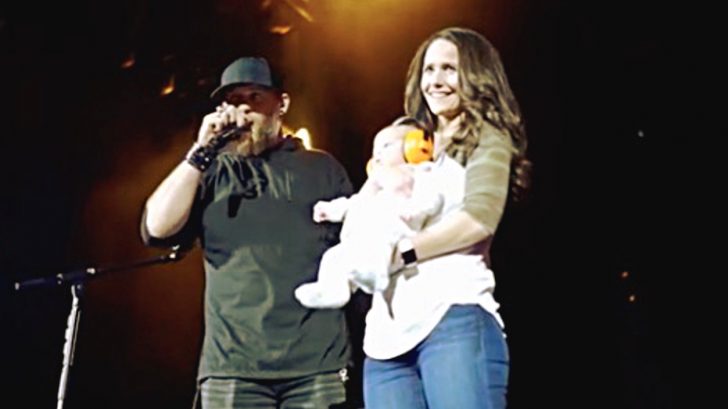 In November, Brantley Gilbert and his wife Amber became first-time parents when they welcomed their baby boy. They named him Barrett Hardy-Clay Gilbert, with his hyphenated middle name being in honor of Amber’s family and Brantley’s PaPaw.

Brantley introduced his son on social media with a simple photo and message. “Still speechless…” he wrote along with a photo of him holding his newborn son in his hands.

Even though Brantley is now on tour, he didn’t want to leave Amber and Barrett behind. So he started constructing a custom tour bus that would allow baby Barrett and Amber to travel with him.

Since Brantley is from Georgia, it was basically a given that Barrett and Amber would tag along to his recent concert there. During the show, Brantley mentioned how it was his first time ever performing in his home state as a father.

To celebrate the special milestone, Brantley decided to introduce the crowd to his son. “I want y’all to meet somebody,” he said as he looked off to the side of the stage.

The crowd roared as Amber walked out on stage with Barrett in her arms. Barrett looked as cute as could be with a big pair of orange, noise-canceling headphones perched on his head.

Brantley held the microphone out to his son to see if he had anything to say about his public debut. But he didn’t even get so much as a coo out of him!

Regardless, the crowd was clearly excited to meet Brantley’s son! You can watch his public introduction in the clip below.

We’re excited to watch Barrett grow as Brantley continues on his tour!

Getting to share my work with my love @ambercochrangilbert and my boy…. #blessed