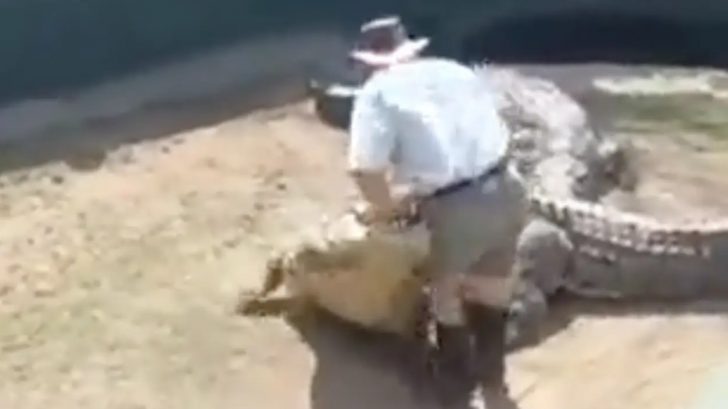 Zookeeper Sean Le Clus was performing live in front of an audience at the Crocodile Creek farm in the KwaZulu Natal province of South Africa when he was attacked by a 16-foot crocodile.

The deadly apex predator sunk its five-inch-long teeth into Sean’s leg as he was trying to get away from another crocodile pursuing him in the enclosure.

Video footage showed him walking towards the beast and cautiously sitting on its back while he played with it with a stick. Everything was fine and dandy until another crocodile started moving towards Sean’s leg which was hanging off the right side of the croc.

As Sean stepped off the croc so that his leg wouldn’t be bitten by the other approaching crocodile, that’s when it happened. Within the blink of an eye, the massive 16-footer whipped around and clamped its jaws down on Sean’s leg.

The male Nile crocodile named Hannibal could have gone into a death roll and caused some major injuries for the man but fortunately, it let go of Sean giving the 68-year-old man time to get away from the man-eating creature.

Sean suffered being penetrated by her five-inch teeth but was lucky that was the extent of it.

A Crocodile Creek spokesman told The South African newspaper, “Sean had two big teeth holes in him but sewed them up himself and was back at work in 20 minutes. It was the first time Hannibal has bitten a handler and it happened because the female moved in on him and she can be very stroppy. Sean was watching the female and Hannibal just reminded him that he was there – if it was a proper bite then it would have been very bad. It is like every job – there is always a chance of injuries.”

Watch Footage Of The Crocodile Attack Below