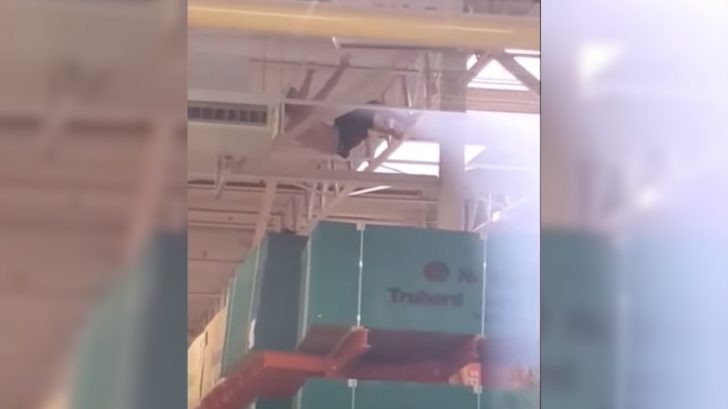 Last Saturday (June 4), a man in Colorado was said to be high on crack when he decided to climb up to the top of the rafters in a Home Depot and got blown off the rafters by triggering the sprinkler.

The video footage was disturbing but then again, absolutely hilarious.

It showed the man after he had climbed to the top of the shelves that were two stories high and he was yelling, cursing, and throwing objects down at the people below who were witnessing his antics.

He’s so high in the air that at one point, he reached up and grabbed the rafters and started pulling himself up into them. Police have made it to the scene by this time and are circling below figuring out a way to defuse the situation.

The man was so off his rocker that he started swinging like a monkey and holding a lighter that he pulled out of his pocket and held up to a sprinkler that was on the ceiling.

Within a few seconds of holding the lighter up the sprinkler, it triggers the mechanism that makes it go off, and guess what?… It did! The force of the water was so strong that it knocked the man down from the rafters and he landed on the inventory shelves again.

Police later arrested him and this is a solid example of why you shouldn’t do drugs.

Watch Footage Of The Incident Below