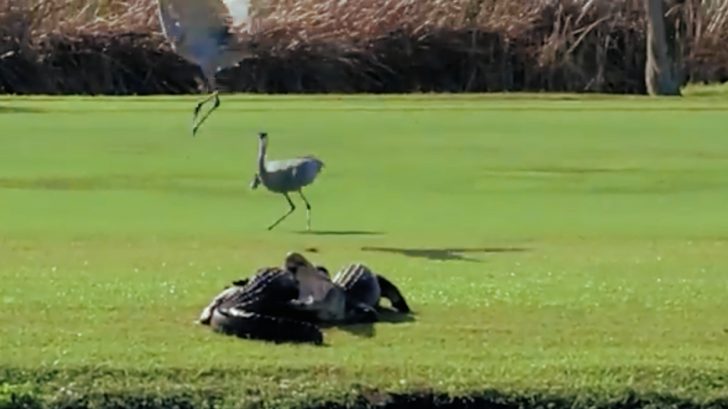 Mary Lukas Jurkowski from Florida posted a video on her YouTube showing two alligators fighting on a golf course.

According to Mary, she was doing work in her yard when she heard a mating call from one of the bull gators. It wasn’t long after that she said another alligator showed up flexing its body and walking up towards the other gator.

“I was doing yard work when I heard a mating call from a bull. I short while later a 2nd alligator showed up. Not sure if this was for territory but it was cool to see,” Mary wrote on YouTube.

She turned her camera on to record and within a few seconds both the alligators dashed toward each other. With a loud crack, both gators bit down on the other one’s back and tail. They shook their heads trying to defeat the other one and the battle was so intense some cranes even flew down from the sky to spectate the wrestling match.

Erika Jackson from WINK News who covers the Charlotte County area said the incident happened at the Rotonda Golf and Country Club. Take a look at it below.