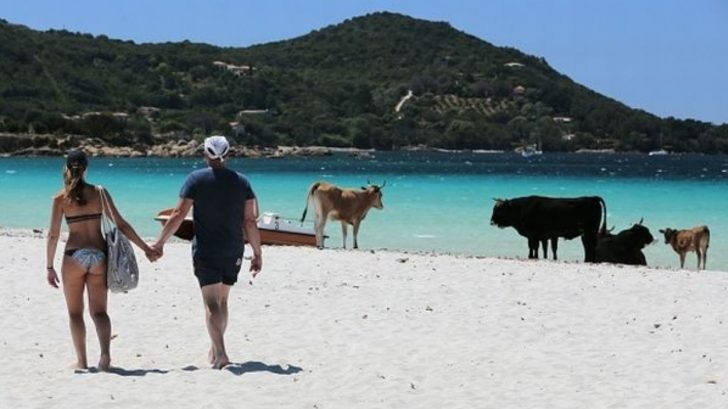 Beaches in Corsica, a French-owned Mediterranean island next to Italy, were closed down over the weekend after too many tourists were getting injured by aggressive cows.

Authorities said the beaches on the island have been vacant for over a year since the pandemic first hit and the wild cows enjoyed having it all to themselves.

However, with the return of things getting back to normal, the cows are not so keen on sharing their space again and have grown very territorial of the white sand on the beaches.

According to New York Post, “Tourists laugh at this as folklore and take pictures, but it’s a real pest,” a local councilor told the paper, and one animal rescue official warned: “When you see that [the cows] are heading in a particular direction, it is best to give them priority.”

Officials said that a man was hospitalized after a cow gored him in the neck as he was walking along a beach in the city of Lotu. Another herd of cows was said to have chased tourists down a popular street, luckily, they got away and no one was injured.

The worst, however, was probably when a 70-year-old woman from the city of Lozzi had to be flown to the hospital with a severe leg wound after she was attacked while hanging laundry outside.

“The lady was wounded two centimeters from the femoral artery,” Lozzi mayor Francois Acquaviva told local newspaper Corse. “If this goes on, there will be deaths.”

They were even reported damaging cars, private property, and rampaging through people picnicking on the beaches of the southern part of the island, near Ajaccio.

Locals say that other unreported encounters have happened and it finally got to the point where Island officials have decided to close several beaches down to prevent something very bad from happening.