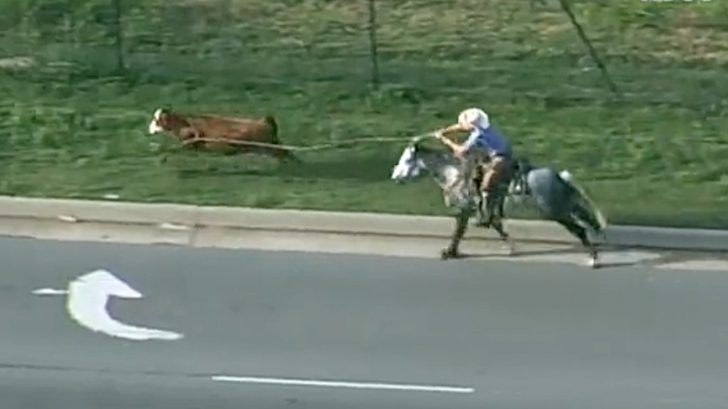 An absolutely wild-wild-west moment went down yesterday (June 6) in Oklahoma City after a cow got loose from its enclosure and started running down the highway.

Video footage shot from a Sky 5 news helicopter that was flying over the incident showed the cow trying to outrun two ATVs that were hot on its trail.

The men in the ATVs tried to use their vehicles to corner the cow into a fence on the side of the road, and it looked like it was going to work, however, the cow leaped over the hood of the ATV and kept on running.

The capture wasn’t successful but it slowed the animal down long enough for a real cowboy on a horse to show up and start chasing after it.

The cowboy was well prepared and already had a lasso in his hands swinging it around in the air. The cow must have known what was coming because it took off running in a super-fast sprint. However, that didn’t last very long.

The cowboy threw his lasso and on the first throw, it wrapped perfectly around the cow’s head and leg. The cow still tried to sprint away but the cowboy had locked the rope onto the saddle horn and the horse stood its ground, preventing the cow from escaping.

By this time, another cowboy showed up on a horse with another lasso and roped it around the cow’s back leg causing the animal to really stop in its tracks.

The exhausted cow plopped down to the ground as it knew the chase was over. The cowboy hopped off his horse to further wrangle the cow.

KOCO News said this happened on Interstate 40 near Pennsylvania Avenue and shared the footage they captured on social media. Take a look at the Twitter video below!

COW LOOSE ON OKC HIGHWAY ?? Sky 5 was flying over the moments when cowboys and emergency crews wrangled a cow that got loose on a busy Oklahoma City highway. https://t.co/pgZRNirP9R pic.twitter.com/NgnlgqiEEA