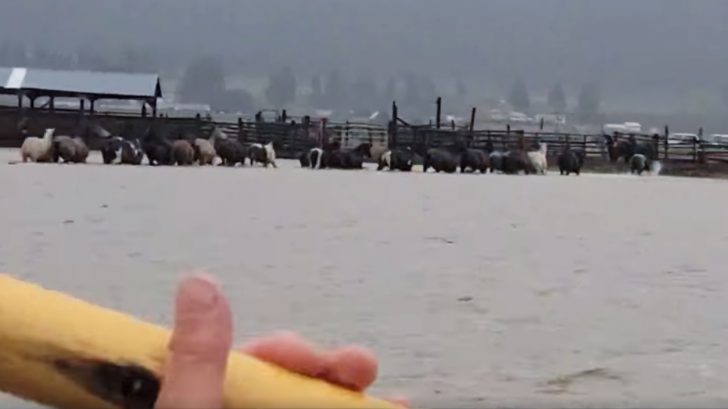 Over the weekend, Canadian cowboy Henry Chillihitzia used a motorboat to save 29 horses that were stuck in freezing water after a fast-moving flood swept over the hayfield.

“That’s my first time doing that in a boat,” Henry told As It Happens host Carol Off. “I knew if we didn’t do anything then, yeah, my heart probably would have shattered in two billion pieces.”

The horses were happily roaming in their hayfield on Sunday night but by Monday morning, they were all standing in what looked like a massive brown river.

It was cold, they were wet and they were trapped. They needed to get to higher ground or they would face hypothermia, exhaustion, and possibly death.

The owners of the horses, Jerry McCauley and Connie Joe needed help so they called Henry who quickly got over there to assist.

They all saddled up and worked together to first move some cows to a safer place and then went on to help the horses. Unfortunately, they could not get the stranded herd to move.

The water was rising and moving about 37mph making it impossible for their saddled horses to swim with the men on their back. Henry said they had to think of another way to get the herd and direct them.

“I said, ‘Yeah, this plan is not going to work, so we have to put our horses away and either put waders on, or get a boat.’ The best way was to get a boat,”

Henry jumped into a boat with the boat owners Phil Dumont and Tyson Vandean and headed out to the herd. For four hours they tried to get the herd to move but they just wouldn’t budge.

“I said, ‘Well, they stood in water overnight, so we can’t give up now. We’ve got to keep trying until we get them in.'”

They started to circle the herd with the boat and would come sideways at them trying to get them to go in the direction towards dry land.

Finally, a mother horse and her foal jumped into the deeper water and started swimming across towards dry land. The herd soon followed them and Henry was able to capture some footage of the dramatic moment.

“I had a lump in my throat the whole time, so my emotions were pretty high. And I own horses myself, so they’re kind of like my kids, right?” he said. “It was a relief for sure, getting them to higher ground and dry and getting them some feed. It was overwhelming.”

All the horses ended up being okay and they eventually stopped shivering and got their bellies full of hay to help warm up their bodies.

“Huge thank you to everyone who was out there all day in the cold and rain and wind doing everything possible to save them!” Henry wrote on Facebook.

Watch Footage From The Event Below