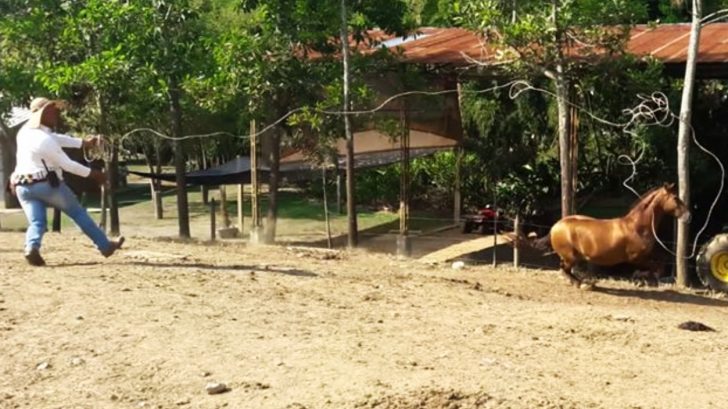 The art of roping is something that many people enjoy and is very much celebrated at rodeos, festivals, and other western events. But, roping a horse from more than 50-feet away isn’t something folks get to see every day – and that’s about to change.

There are a few different styles of roping and one of the most common to see at events is team roping, but the technique has its origins in a utility purpose that has been used on ranches and farms for more than 100 years.

James Walker’s “Cowboys Roping a Bear” in 1877 reveals the Hispanic origin of the iconic cowboy in a Western saddle @DenverHistory pic.twitter.com/VL7SHRBrLw

Roping started out as a way to restrain or capture livestock that was too hard to handle by just a single cowboy. Often it was used on calves, easily-spooked horses, and even sheep. Then, the livestock would usually receive medical treatment or branding.

Over the years, ranch hands began having informal contests on who could rope livestock the fastest and it has since grown into a full-fledged sport and beloved part of rodeos worldwide.

The incredibly talented Tomas Garcilazo, pres. by @GeneralMills is back with his equally as impressive horse, Hollywood! We love watching him perform his roping skills at the Rodeo! pic.twitter.com/EMT79DiLEa

Still used today, roping is an important part of life on any farm or ranch that has a large amount of livestock and if you’ve ever been around a wild or unbroken horse, you know how important it can be to getting your job done.

Colombian cowboy Jose Alvarez recently shared a jaw-dropping video of his own incredible roping skills when he was trying to get ahold of a horse who hadn’t been broken yet.

Standing across the pen at a distance that looks to be at least 50 feet, Alvarez is seen running toward the horse with lasso in hand. Not but a split second later this slo-mo action video captures the moment he attempts to rope the horse at a distance most would fail at.

Remarkably, his crazy-fast skills landed the rope squarely around the horse’s neck and he’s able to reign it in with just one go!

Watch this wild video below and show it to your cowboy friends who need to see how it’s done!