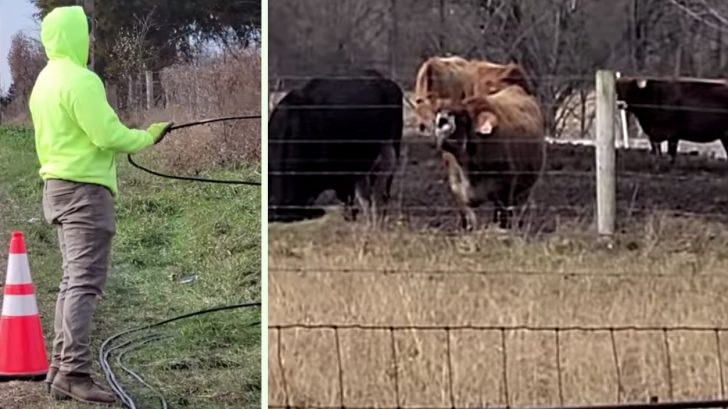 A hilarious video that has folks falling out of their chairs with laughter is back again after going viral on November 24, 2021, in the rural town of Shipshewana, Indiana..

A group of linemen in Indiana were standing on the side of a road installing a new fiber optic cable near a field of cows when the incident was filmed by one of the men.

The cows seemed to be very friendly spirits standing at the edge of the fence watching, as well as, the linemen who were happy because it was almost time for them to be off work and go home to celebrate Thanksgiving the next day.

The job was getting handled pretty smoothly and one of the men was goofing off a bit, making ridiculous turkey-sounding noises and sticking his tongue out at the group of cows looking at them.

One of the cows responded back to the man by sticking her tongue out too and wiggling it around copying him and making a funny noise of her own.

The person who filmed the video explained to ViralHog, “Our company was putting in new fiber optic cable and was working in front of an Amish farm. It was the day before Thanksgiving and the guys were ready for the holiday and playing around. The rest is on video.”

The men joked that the cow was actually “flirting” with him by making all those strange faces and hilarious noises.

Watch Footage Of The Cow & Linemen Below