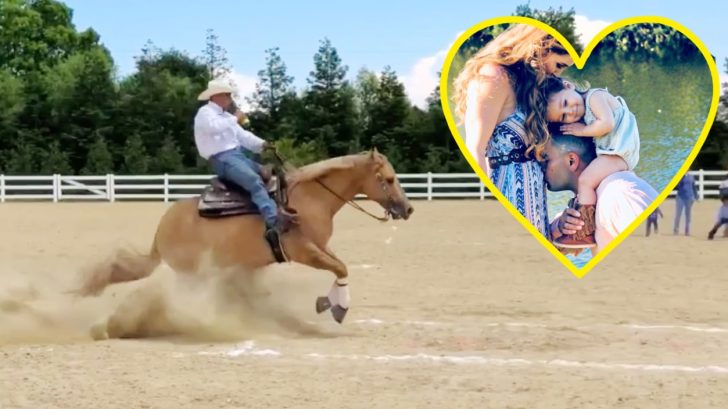 We’re sure you’ve seen your fair share of gender reveal videos and photos over the years. For many expecting couples, the chance to surprise friends, family members, and fans (in the case of celebrities), with the news of whether they’re having a boy or a girl is an exciting experience.

From colored cakes, to balloons packed full of colored confetti, to coloring in the “he” or “she” on a Hershey bar, there are so many ways that couples can choose to reveal the gender of their new bundle of joy.

Just look through the posts below to see a few country singers’ gender reveals within recent times.

But now that gender reveals have become such a common thing, some couples feel the need to get even more creative, or do something that shares a more personal connection to their lives. That’s exactly what one cowboy and cowgirl couple from California did!

Just one glance through Abby and Chuy Chavez’s respective Facebook pages will clue you in to how much they love horses. So it only made sense for them to enlist the help of a four-legged pal to help with the gender reveal for their second child.

The couple already shares a daughter, so they were surely anxious to see if they’d be having another girl or would be welcoming their first boy.

Chuy saddled up on a trusty steed and sent it galloping across a pen, where a line of colored dust was hidden under the dirt. When the horse skidded to a stop, he kicked up the hidden dust, and a cloud of blue flew into the air! It’s a boy!

Everyone watching cheered as soon as they saw the dust fly into the air. Chuy quickly hopped off the horse to embrace Abby, who came running to him as soon as the reveal was complete.

Abby posted a video of the epic reveal online and it went viral. As of press time, the video has has over 2.4 million views and has been shared over 35,000 times.

Now you can watch the viral gender reveal video below. It was such a creative idea!

Thank you Jennifer LeMere and Danielle Goodan for the most EPIC GENDER REVEAL of ALL TIME!!!! It’s a…………….