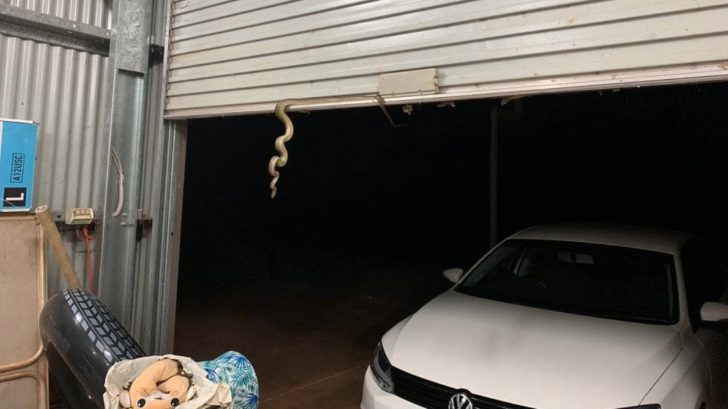 A British woman named Holly O’Driscoll recently got the shock of her life after moving to Darin from Sydney for a two-year job contract.

Holly said she and her husband were at their home when they heard something banging up against the garage door. When they went to go check what it was, they could see a snake slithering near the bottom of the door and so they opened it hoping the reptile would slither off outside.

However, that did not go as planned. The snake, still attached to the door, was lifted into the air and about to be rolled up into the door.

“So I stopped the door halfway because I thought ‘I can’t let it roll up in the door.’ Then just sat there and watched to see what it did and it didn’t move for what felt like a life time,” Holly said in an inverview with ABC.

She took photos of the animal and posted them to the Facebook group Reedy’s Reptiles to try to figure out what kind of snake it was while the snake slithered up the wall grooves of the garage.

“If this is a snake that’s going to kill me, I want to know,” she asked on Facebook.

“No, it looks like an olive python and they’re harmless,” someone replied.

Holly told ABC, “I haven’t told the kids yet, my eldest daughter would literally run back to Sydney.”

She explained that her home is actually a converted garage and it is not fully sealed off to the elements of outside, along with the creepy creatures that may roam around the area.

The snake ended up slithering off. Where? Holly has no idea. It could have made its way back outside, then again, it could still be slithering around the garage. Holly said she has been left unsure of what to do about the situation now.

Watch Another Woman Get Bitten By Snake While Sleeping