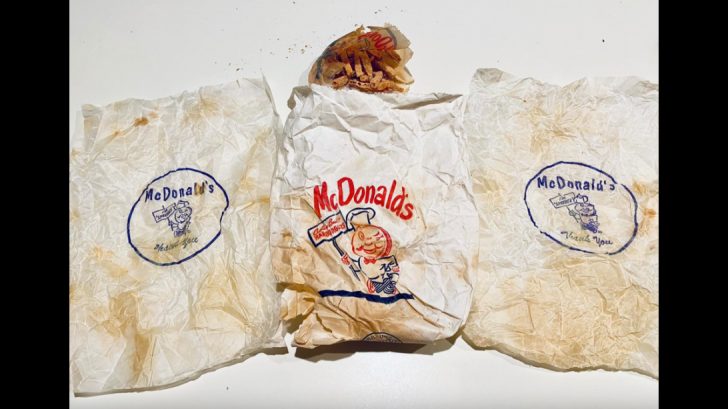 An Illinois couple unearthed a treasure of an “awesome and disgusting” kind while renovating their Illinois home recently.

Gracie and Rob Jones from Crystal Lake, Illinois, were renovating the bathroom of their 1959 home when they discovered some McDonald’s memorabilia that included an package of french fries that they say were “perfectly preserved.”

“Rob was in the bathroom replacing the old toilet paper fixture,” Gracie told CNN. “As he pulled the fixture out, he noticed a rolled up piece of cloth bunched up inside the wall.”

They were a little nervous to find out what they had pulled from the wall, but were relieved to find that it was nothing more than some impressive McDonald’s relics.

“At this point we’re both looking at each other wondering if we’d be calling the police because we just uncovered evidence from a crime scene!” Gracie said, “We were very relieved to have just found the old McDonald’s bag.”

The couple carefully opened the bag to discover two hamburger wrappers and some old french fries that they said were crispy and brown.

“We saw the fries and were like, ‘This is unreal.’ How on Earth are these fries still in this bag and how are they preserved so well?! It was wild,” Gracie said, adding that the fries had no smell.

After researching their find, they discovered that the logo and the fast food chain’s original mascot named Speedee were used on the McDonald’s bags from 1955-1961.

Gracie and Rob said that if they don’t find an interested buyer for the artifacts, they’ll likely keep them as “a cool piece of history.”