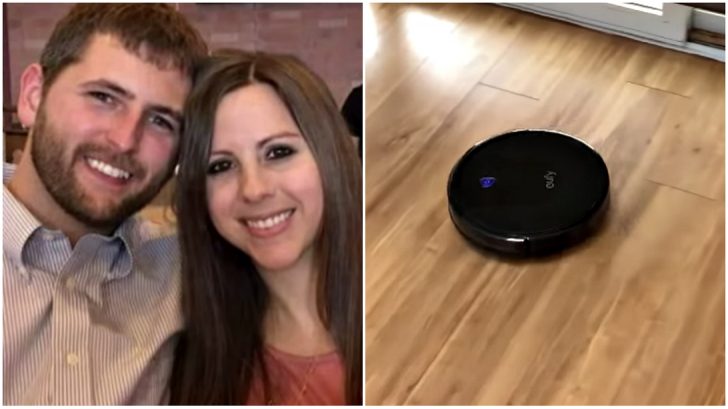 A North Carolina couple were enjoying a quiet night at home with a movie when they got a scare thanks to a new Christmas gift.

Thomas and Elisa Milam were watching a movie when they began to hear noises downstairs just after midnight on December 22. The pair paused the movie and Thomas sent his wife to a safe place in their home.

“I immediately grabbed my gun, went to Elisa and we stayed there silently waiting to see if we heard more noises. We did, and in fact they were loud. Someone was definitely downstairs rummaging through things, and it sounded close to us,” Thomas shared on Facebook. “I had Elisa call 911, they dispatched the police almost immediately, the operator asked if I was armed, we told her yes that we were armed and our location in the house.”

The couple continued to hear noise downstairs as they waited for authorities to arrive. Thomas began to make a plan of action in case the intruder were to come upstairs and try to harm them or their baby that was sleeping in the adjacent room.

Within minutes of Elisa calling 911, police arrived and made their way into the home. Thomas kept his gun pointed at his bedroom door until the 911 dispatcher instructed him to put his gun down and go talk to the police. Thomas, dressed only in his boxers, followed instructions and exited his room with his hands in the air to find police officers shining their lights up the stairs.

“They all started holstering their weapons and said ‘Sir, I have one question…,'” Thomas recalled. “Is this ROOMBA yours?”

The couple had purchased the robot vacuum cleaner, which they had named Harry, two days prior and it had gone to work in the middle of the night. It became stuck in the hallway below the staircase and kept bumping into the wall. While Thomas Milam was embarrassed by the incident, he also encourages homeowners that it’s better to be safe than sorry.

“Merry Christmas everyone, make sure you turn off your robot vacuums before they rob you blind.”

Our new friend Thomas made this post on his personal social media after he had to call us for assistance last night. We…

Hear the Thomas and Elisa Milam recount their terrifying night and hear excerpts of the 911 call in the clip below.