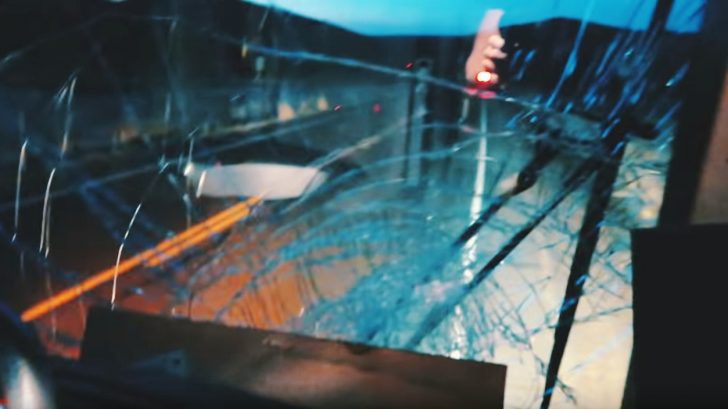 In the middle of the night, a loud crash and the sound of breaking glass rattled all the folks sleeping in the back of the tour bus – an event that they describe as something “you never want to wake up to.”

Traveling through a rural part of Idaho on the way to a concert performance and meet-n-greet session, Dustin Lynch, and his band were shaken awake by terrifying sounds and quick deceleration of their tour bus.

Flying high in the big sky | Full video in Bio

For the last couple of months, Lynch and his team have been uploading an entire series of video blog entries to his social media and continued in the same tract when sharing the news of their freeway accident involving a large animal.

“Well, we never wanna wake up to this people,” Lynch says behind the camera as he shows the crushed windshield. “First time this has happened…”

He exited the bus in just his boxers to examine the damage to the bus and see just exactly what they had hit. Walking around to the back of the bus and looking across the ditch, he says that they struck a massive elk – one that could have caused a lot more damage!

@dustinlynch hit a deer with his tour bus last night while driving through #Idaho pic.twitter.com/XrxjWGk63s

Luckily, everyone on board was alright and the only casualty was the animal that they struck going upwards of 50 m.p.h. on the freeway.

If the elk had struck any other part of the bus, they could have been stranded or the bus could have been completely disabled. Later on in their video, the driver explained to Lynch that his close friend (and fellow bus driver) had a deer take out the entire dash and instrument console.

For now, they just patched up the broken glass with some duct tape and sturdy planks so they can continue on their journey.

Watch the full video from Dustin Lynch below.

Warning: some viewers may find the content graphic or unsettling. Viewer discretion is advised.