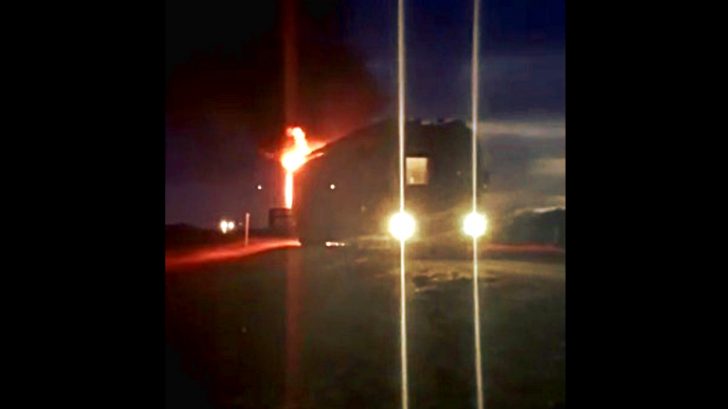 Brantley Gilbert had quite a close call recently. Close enough that he’s likely thanking his lucky stars that he’s safe.

Since Gilbert is on his The Ones That Like Me Tour, he is currently traveling all over the country for various concerts. Just like most country artists, Gilbert’s go-to form of transportation for touring season is a tour bus.

However, Gilbert no longer has a bus to use after his randomly caught fire while he was on board.

On Monday (March 12), Gilbert shared a video on Instagram that showed the entire back of his tour bus engulfed in flames. Since it was dark outside, the fire stood out even more, creating a terrifying scene.

Even though he stood there and watched his bus go up in flames, Gilbert still managed to find some humor in the situation. He set the video to his song “Hell on Wheels,” and kicked off his caption with a comical remark.

“Hey y’all…. adding pyro[technics] back into the set…. working out details now…” he wrote.

Putting the jokes aside, Gilbert got serious for a second to share that he, his crew, and the drivers all made it off of the bus in time, and that no one was injured.

Hey y'all…. adding pyro back into the set…. working out details now… In all seriousness…. thankful no one was injured…. bus drivers are safe…. I'm safe…. see y'all back on the road soon….

We’re so glad to hear that Gilbert and everyone else on the bus were unharmed.

Even though Gilbert found some humor in the whole thing, we’re sure he was a bit shook up. Watching your tour bus catch fire would have to be a scary thing to witness!