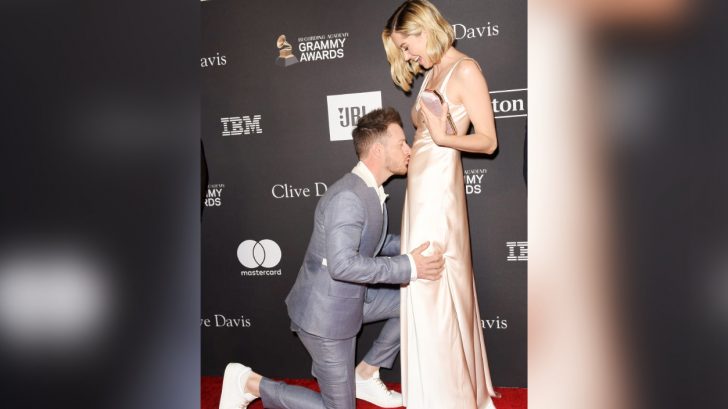 Looks like the country music family is about to get even bigger this year!

So far, 2019 has welcomed a bunch of new little ones into the country music community. Carrie Underwood and her husband Mike Fisher welcomed their second child, son Jacob, in late January. And one of the most recent additions is little Navy Rome, daughter of Jason Aldean and his wife, Brittany.

Today our family became complete as we welcomed our daughter Navy Rome to the world. Born on 2/4/19 weighing 7lbs 12oz and looking identical to her older brother. So excited to watch what life has in store for this little princess. ??

Navy is the Aldeans’ second child, with their first being 14-month old son Memphis.

It seems that this year is the year for country stars to welcome a second little one into their families, and that’s exactly what Tyler Hubbard of Florida Georgia Line and his wife, Hayley, are doing!

Tyler and Hayley joyfully announced in June 2017 that they were expecting their first child together.

They posted a couple of instant photos they had taken with the positive pregnancy test to share the news with their fans. “Holy cow we’re going to be parents,” Tyler wrote on Instagram.

We've had such a hard time not telling everybody for the last few months because we are SO excited…. WE ARE PREGNANT. Holy cow we're going to be parents. God is so good and we can't wait for this next chapter of our life. #lilhubbard

Originally, the pair thought they were expecting a son…but they were in for a surprise!

After spending some time preparing for the arrival of their baby boy, the Hubbards learned that they were actually expecting a girl. Tyler shared that news on social media as well, writing, “After thinking we are having a boy for the last few months, turns out the blood test was wrong and we’re actually having a little girl.”

Gods got jokes……After thinking we are having a boy for the last few months, turns out the blood test was wrong and we're actually having a little girl. Woe… so many emotions but really really excited about this next chapter even if God does like throwing us a curve ball every now and then. Just keeping us on our toes. #daddysgirl

That little girl, baby Olivia Rose, was born on December 23, 2017. The precious baby stole her parents’ hearts in an instant, and has since won over the hearts of all who follow Tyler and Hayley on social media.

She just celebrated her first birthday a couple of months ago, and she has already grown up so fast in such a short amount of time!

It’s hard to believe our little nugget turned one a couple weeks ago. She’s so happy about it. Thanks @sydneyclawson for capturing this moment.

Now, little Olivia needs to get ready to grow into her role as big sister, because her mommy and daddy are getting ready to welcome another little one this year!

The couple dropped the surprise pregnancy news in an even more public way than they did when they were pregnant with Olivia. Since they were out and about for the Grammy Awards, they felt the Grammys weekend was the perfect time to share their big news.

While walking the red carpet at a Grammys pre-party, Tyler stunned everyone when he got down on his knees and kissed Hayley’s belly. Of course, the moment was captured on camera, and Tyler later shared the photo on Instagram while gushing about his growing family.

“We are excited to share that little nugget #2 is on the way,” he wrote. “We are so thankful and can’t wait to see Olivia be a big sister.”

The Hubbard family is growing. We are excited to share that little nugget #2 is on the way. We are so thankful and can’t wait to see Olivia be a big sister. What do y’all think…. boy or girl? [email protected] / @bauergriffin / @Getty entertainment

He then ended his post by asking his followers if they think he and Hayley are expecting a boy or a girl this time around. Maybe they’ll finally get a baby boy after thinking they were having one before Olivia was born!

Speaking of Olivia, a second photo in Tyler’s post shows the little tot seated in the snow next to a chalkboard that reveals when her new brother or sister is making his or her arrival…in August!

Tune in to the video below to hear Tyler and Hayley talk more about their impending arrival. They apparently weren’t sure if they were going to share their happy news yet, and Hayley’s Grammys dress was designed to hide her bump just in case.

Congratulations to Tyler, Hayley, and Olivia! We can’t wait to meet the new member of the Hubbard family!