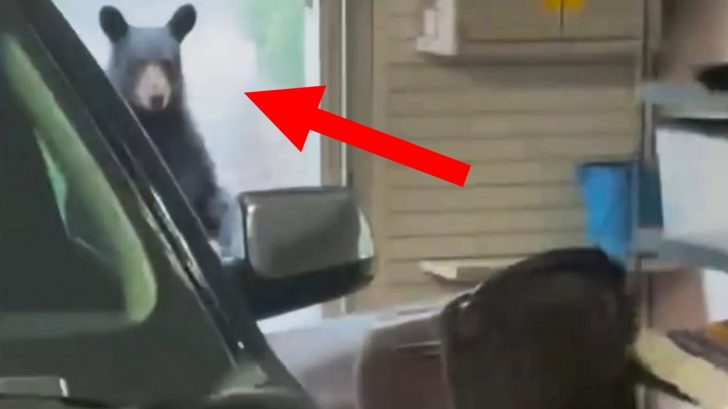 Imagine this. You’re getting ready to go out on a hike with some of your friends. You put up the garage door and prepare to head outside, when you suddenly come face-to-face with a bear.

That’s exactly what happened to country star Brett Eldredge…and he caught the whole thing on camera.

Eldredge got up one day to head out on a hike in the great outdoors. He put up the garage door, never expecting what was waiting for him on the other side.

As the garage door went up, Eldredge discovered a black bear poised outside. The animal wasted no time in entering Eldredge’s garage, and made a beeline for the trash can in the corner.

Eldredge and the other people he was with kept their distance from the bear while yelling at it to go away.

“Out! Get out of here!” Eldredge and his friends shouted at the bear.

But the bear ignored their calls, and kept messing with the trash can until it finally toppled over. The bear only backed away when one of the guys began hollering in a deep voice and someone stomped their feet.

Eldredge was amused by the whole thing. He shared the video of the bear on his Instagram page, and said, “Opened the garage door to go on a hike and had a new friend waiting to say hello.”

Watch the video of Eldredge’s bear encounter below.

We’re glad Eldredge was able to find some humor in the situation. Though we’re sure he was quite surprised and startled when he opened his garage door and saw the bear standing there!