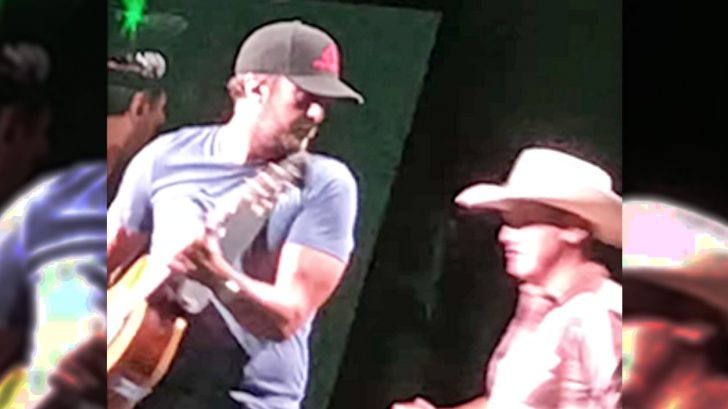 During the summer of 2018, Luke Bryan has been traveling from city to city putting on one of his best tours to date. With openers like Morgan Wallen and Jon Pardi, it’s hard to imagine people not having a good time while attending his What Makes You Country Tour.

The end of summer was winding down, so you know that on stage antics will be at an all-time high! This statement was proven true during a recent tour stop.

During his headlining set, Bryan sings everything from his very first hit, “All My Friends Say,” to his latest soon-to-be number one single “Sunrise, Sunburn, Sunset” and everything in between. Not only does he perform his own chart-topping songs, he also sang one of Billy Currington’s titled “Good Directions.”

Now, he didn’t just randomly pick this song to cover this tour – he chose it because it was the first song he ever wrote that was cut by an artist. It became Currington’s second ever number one on Billboard‘s Hot Country Songs chart and spent three weeks there.

While Bryan was performing an acoustic version of “Good Directions,” someone snuck up on him and completely scared the crap out of him! A cowboy hat wearin’ Jon Pardi came on stage towards the end of the song to scare Bryan – and it definitely worked!

Bryan visibly noticed a figure running up from behind him and looked legitimately concerned for a moment, before realizing it was actually his tour mate!

“Shit. I thought I was getting attacked!” he told the screaming crowd.

Bryan continued to play “Good Directions,” and Pardi couldn’t stand still! He was waving his arms around, trying to play Bryan’s guitar, and interacting with the crowd.

It’s very clear that once the “Dirt On My Boots” singer’s set is over, he’s ready to have a good time, and Bryan confirmed this to be true by saying, “Pardi has been partying ladies and gentlemen!”

Pink is a strong color. #ericchurch’sgolfthing

Watch him scare Bryan in the video below.