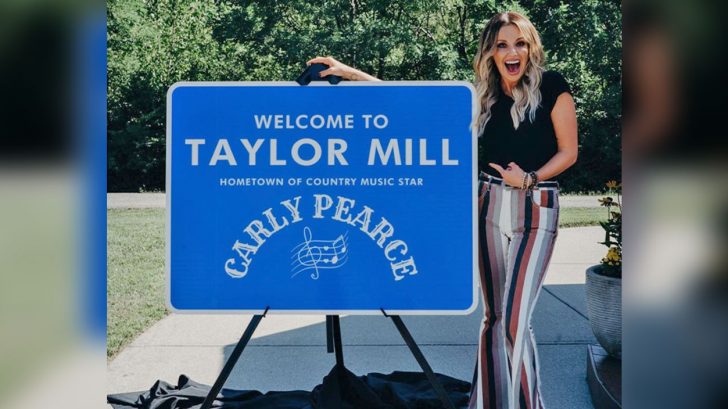 Carly Pearce was recently honored with an official Carly Pearce Day on September 2, in her hometown of Taylor Mill, Kentucky.

“It was a no-brainer for the city to give her some accolades for her success,” he told WKRC TV.

The small town of just over six thousand people had a sign placed at the entrance to the town, which read “Welcome to Taylor Mill, Hometown of Country Music Star, Carly Pearce.”

In addition to the sign, Pearce also got a key to the city and became a Kentucky Colonel.

Unfortunately, the sign was stolen less than a week after it was erected.

“She was nice enough to take pictures with a lot of the police officers that helped protect her that day. Unfortunately, just yesterday morning, somebody had stolen that sign,” Taylor Mill Police Chief Steve Knauf told WKRC TV, adding that someone removed the bolts and took it off of the metal poles where it was attached. He went on to say he believes it was a two-person job, and sooner or later the culprits will more than likely brag about their prize. “Hopefully, maybe somebody said something to somebody,” Knauf said.

The city already replaced it with a second sign that was supposed to go up in the north end of the city.