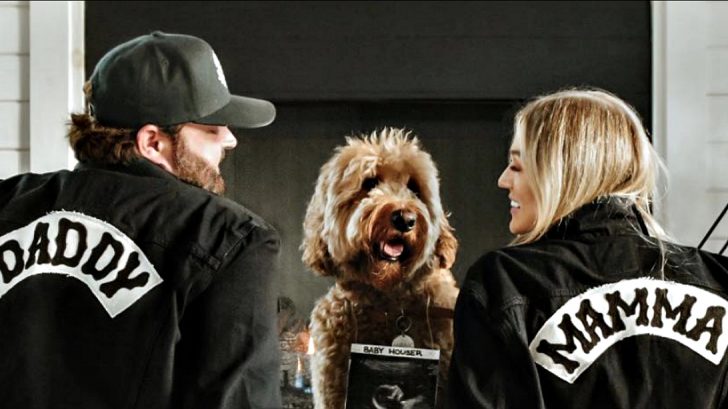 ‘Tis the year for country music babies! Just days after the arrival of Carrie Underwood’s new son and as the due date approaches for Jason and Brittany Aldean’s daughter, another country singer has announced that they will also be welcoming a new baby in 2019.

Singer/songwriter Randy Houser and his wife, Tatiana, shared the exciting news on Sunday (January 27) that they are expecting their first child together in June. In a photo shared to Instagram by both proud parents, they can be seen wearing black denim jackets with “Daddy Houser” and “Mamma Houser” on the back. Their precious pooch Hawk is posed between them with an ultrasound photo of Baby Houser around his neck.

“2019 just keeps getting better. Man it has been hard to keep this secret because we are SO EXCITED. We’re Pregnant!!! BABY HOUSER IS COMING IN JUNE!” Randy captioned the photo. “I feel so completely blessed to have this news to share ?? Can’t wait for the best year of our lives.”

Tatiana shared her excitement with a caption that read, “?SURPRISE! ?? This has been the hardest secret to keep but it’s time to let the bump out!??BABY HOUSER IS COMING IN JUNE! Our hearts are bursting with excitement!! We can’t wait to bring our little love baby into this world ?? 2019 is going to be our greatest adventure yet!”

The upcoming arrival is the first child for Tatiana and the second for Houser who has a son, West, from his previous marriage.

We are so ready to get married! #happilyeverhouser

Randy and his wife were introduced by Tatiana’s brother-in-law, songwriter Dallas Davidson. It was love at first sight for the pair who became engaged after two months and wed a year later.

Dreams do come true | I still can't believe that I get to spend the rest of my life loving you @randyhouser #happilyeverhouser ? @the_grovers Dress: @jatoncouture Hair: @mojamezie Make up: @_brittanylayne_

Randy Houser got his country music start as a songwriter, with hits like Trace Adkins’ “Honky Tonk Badonkadonk” and “Back That Thing Up” by Justin Moore. He launched his solo career in 2008 and saw chart success with his singles “Anything Goes” and “Boots On.” His first No. 1 hit, “How Country Feels,” topped the charts in 2012, followed by “Runnin’ Outta Moonlight,” “Goodnight Kiss” and “We Went.”

Houser’s latest single, “What Whiskey Does,” was released in 2018. Check it out below! And join us in congratulating Randy and Tatiana on their baby news by leaving your well wishes in the comments below.