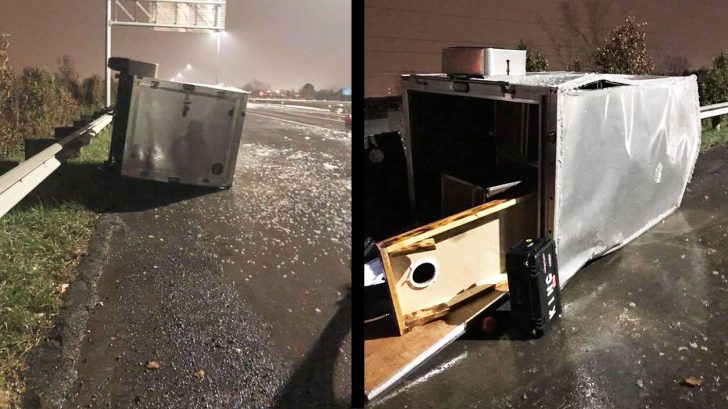 As winter approaches, so does the harsh weather conditions. One country singer was making his way to Pittsburgh when slick roads caused his trailer to disconnect from his truck. The singer was on the way to perform a show but the weather had other plans. Luckily, Brandon Ray and his band are safe.

Brandon Ray is a singer/songwriter based in Nashville. Originally born in Texas, Ray discovered his real musical talents when he bought his first guitar at 13. By age 18, he began touring with his band playing 750 shows in just three years. When Ray moved to Nashville in 2008, he landed a publishing deal and got the opportunity to play guitar for Brett Eldredge. Continuing to get his voice out there, he lent his vocals to various publishers and songwriters.

HUGE thank you to @chaserice for having us out this weekend! You, your band, & crew went above and beyond to treat us with kindness and make sure we were taken care of. To Baltimore, Ft Wayne, & Kalamazoo – we had a blast and can’t wait to come back! ?: @nemphotography ?: @lukepix ➡️ SWIPE

Just within this past year, Ray has found himself opening for an array of country stars. Some of whom include Jon Pardi, Martina McBride, and Chase Rice. August of 2017, Ray released a song called “Ends Of The Earth” which was produced by Keith Urban. He thanks the country star for getting him where he is today.

1 year ago today… I released a song called #EndsOfTheEarth that @keithurban & @rosscopperman produced. Things have never been the same since! I’m So thankful for these 2 guys, and the fact that i get to keep working with them is a dream – what a team! ? #EndsOfTheEarth #OneYear #KeithUrban ?: @rosscopperman

As Ray has been reaching a larger fan base, he has been going on tours across America. While driving through Columbus to his Pittsburg show, the band hit black ice on a bridge where they hydroplaned and their trailer with all their equipment disconnected. As the trailer let go, it flipped into the guardrail. It was an unfortunate series of events for the band as they weren’t sure the condition of their instruments. Nonetheless, Ray was more thankful to see another day.

“Sometimes you just have to smile and thank God you’re alive! Things can be replaced, but we can’t… really close call last night…”

We are ok, thank God. Hit a patch of ice on a bridge outside of Columbus, hydroplaned, and our trailer disconnected and flipped into the guardrail. Our plan is to get a Uhaul in the morning, transfer our gear, and head to Pittsburgh. Say a prayer for safe travel tomorrow. So thankful we are ok ? Thank you @heyitsluke @ryantantdrums & @benkingmusic for stepping up and helping me sort through all of this calmly. Night everyone.

Unfortunately, the band was forced to reschedule their Pittsburgh shows due to the weather conditions.

Our prayers go out to Brandon Ray and his band in hopes for their safety and quick recovery of equipment!

Sometimes you just have to smile and thank God you’re alive! Things can be replaced, but we can’t… really close call last night…………….. We are SO sorry, but due to weather and road conditions (and the above picture) we are going to have to re-schedule our shows tonight in Pittsburgh and tomorrow in Newport News. We are really bummed but I promise you we will let you know the re-scheduled show dates as soon as we can. Tickets already purchased will be valid for the re-scheduled show date. Refunds are available at point of purchase. ?: Tow Truck Driver Steve