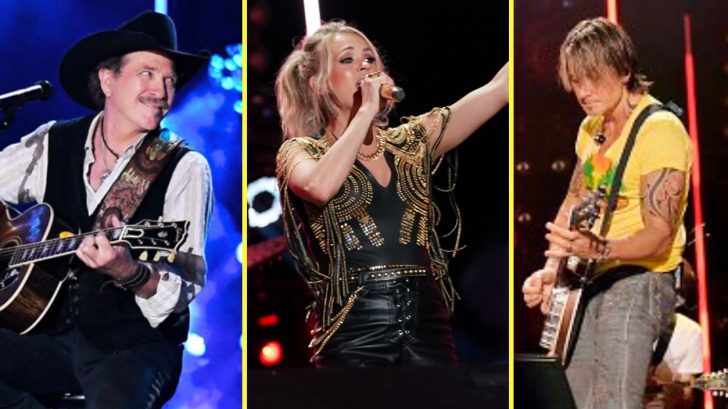 In honor of the CMA Fest special that aired on August 4, Fox Business put together a list of the net worth of all the performers, which just so happen to be some of the biggest names in country music right now.

Dubbed as the music event of the summer, the event included performance from Carrie Underwood, Miranda Lambert, Maren Morris, Brothers Osborne, Midland, and more. The star-studded special was hosted by Thomas Rhett and Kelsea Ballerini along with special guest host Bobby Bones.

Let’s take a look at how much these country stars are worth!

what a week. so much new music I am just beaming to share with you in the new year. ? pic.twitter.com/VkpNt7vkhQ

Three-time CMA Fest host Ballerini is only 25, but she’s making a name for herself in the industry. The first three singles of her career all hit number one, was included on Forbes‘ 2017 list of “30 under 30,” and headlined her very first headlining tour this year.

According to the site Celebrity Net Worth, her net worth is $6 million.

Missed #CMAfest last night? Want to rewatch fave performances? Can't get enough of Country Music? ?‍♀️?‍♂️ We got you! Stream the show now on @Hulu & other On Demand providers. ? pic.twitter.com/BqEgXLY7Ns

Ballerini’s co-host, who hosted for a couple years with Brett Eldredge before teaming up with the “Miss You More” singer, is worth $5 million.

Shoutout to these hard workin' men for hyping up the crowd at #CMAfest ?? @BrooksAndDunn @BrothersOsborne pic.twitter.com/J28QWxT9Cb

The brother duo, who are CMA’s reigning Duo of the Year, performed one of their own songs as well as “Hard Workin’ Man” with Brooks & Dunn.

These hard workin’ brothers are each worth upwards to $1 million.

One of the veterans that graced the stage, McGraw – who performed his song “Real Good Man” with Luke Combs – is worth a little bit more than some of the newcomers.

He’s been cranking out hits since 1992 and is worth $80 million, according to Celebrity Net Worth. In 2015, Forbes reported that he was making $38 million a year thanks to not only music, but also acting and endorsement deals.

Lambert performed solo, debuting a brand-new song titled “Locomotive” and she sang with her band the Pistol Annies.

Thanks to her seven wildly successful albums, tours, clothing line and more, her net worth is reported as $45 million.

Underwood opened the show with her summer anthem “Southbound” and performed “Bad Reputation” with the legendary Joan Jett.

With countless hits dating back to her American Idol days, she rakes in at least $500,000 per concert, making her net worth upwards of $85 million.

Love this new single by @KeithUrban.
? We Were ?
Have you heard it? So good! #CMAfest pic.twitter.com/4FEimKCFPp

Like McGraw, Urban’s career began in the 1990s, but is still dominating the charts almost 30 years later. Between tours, records, and his four-season stint judging American Idol (where he made $6 million a season), Urban’s net worth is reported as $75 million.

TONIGHT! Watch #CMAfest, The Music Event of Summer, at 8|7c on @ABCNetwork! We’ll be performing songs from our #REBOOT album alongside our collaborators @AshleyMcBryde and @brothersosborne! pic.twitter.com/Cd16OXT8fm

The legendary duo performed with Brothers Osborne and Ashley McBryde, largely because of their wildly successful album Reboot, where they perform all their classic songs, but with modern artists. Thanks to decades of success and a continued Las Vegas residency with Reba McEntire, the band’s net worth is reported to be a whopping $100 million.