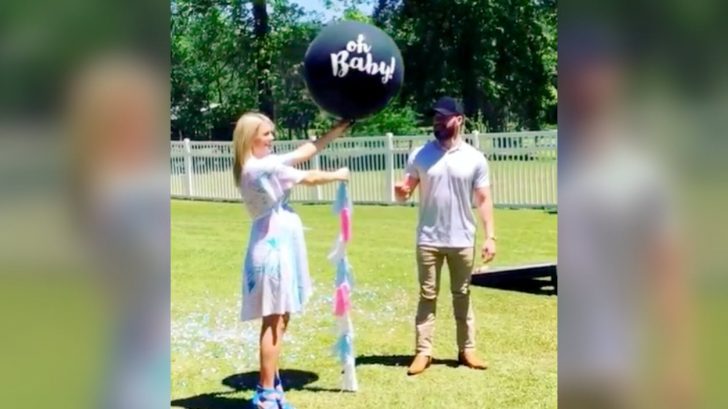 In 2016, country singer Dylan Scott earned his first number one single with a song titled “My Girl.” The track was inspired by his relationship with his longtime love Blair Anderson, who he married the same weekend that he released the song.

The two high school sweethearts wed during a gorgeous ceremony in their home state of Louisiana.

They are in! And I'm getting the feelings all over again! Before I share anymore my husband needs to see them?

Dylan and Blair had been married for a little less than a year when they revealed they were expecting their first child. They posed for an adorable photo to announce the happy news, which showed them holding a onesie and a pair of booties while Blair kissed Dylan on the cheek.

Not long after making their initial announcement, the couple hosted a gender reveal party to find out if they were expecting a boy or a girl. The two shot confetti into the air to reveal they were having a baby boy!

Blair and I are over the moon excited about our little BOY!!

Dylan and Blair wasted no time in growing their family after Beckett’s arrival. In March, the pair revealed that they are expecting their second child, and that Blair is due in September.

Beckett joined them for a precious photoshoot to announce the big news. All three Robinson family members appeared in matching black leather jackets while Dylan and Blair held up gold balloons that spelled out “baby.”

Secret is out… we are so excited to announce baby number ✌? is on its way!? #september2019 ?: @blackmountainweddings

Just as they did with Beckett, Dylan and Blair chose to host a gender reveal party to find out the gender of their second child. It appears the party was over Easter weekend, and Dylan shared a video of the reveal on Easter Sunday.

Blair held the balloon while Dylan had the honor of popping it. Once the balloon burst, bright pink confetti fluttered onto the ground, revealing that they’re expecting a baby girl!

Have you ever seen a more excited reaction than Blair’s? She was literally jumping for joy!

Dylan was clearly over the moon as well, writing in the caption to the video, “Man, God has sure blessed Blair and I.”

When Dylan and Blair were expecting Beckett, Dylan announced the news by asking if they were having a “#mygirl ? Or #myboy ?” Now they’ll have one of each!

Congratulations to Dylan and Blair on the upcoming arrival of their daughter. We can’t wait to meet her!