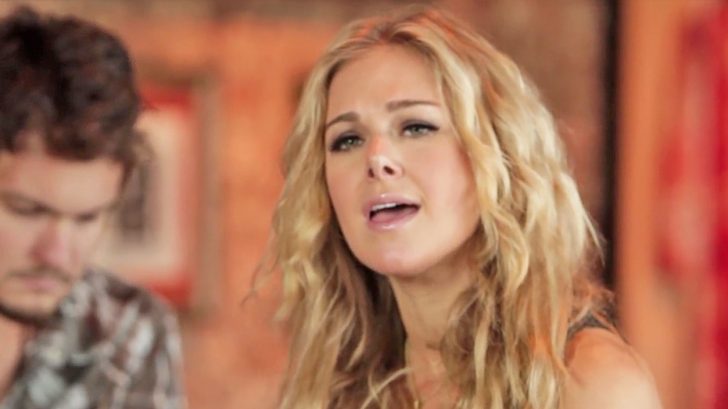 For singer, actress, and dancer Laura Bell Bundy, family is everything. Raised in a small town in Ohio, Bundy had big dreams of becoming a star, and her entire family supported her along the way.

She made her mark on the Broadway world by playing Amber Von Tussle in Hairspray, Elle Woods in Legally Blonde, and even played Glinda in Wicked, along with several other Off Broadway roles.

When I woke up and saw the date today, I thought 'August 15th, I know that's someone's birthday… why does that date feel important?'… because 'AMMMBBBEERR' it's the 15th birthday of our beautiful musical 'Hairspray!' Sadly, in light of the recent events in our country, the message seems more relevant now than it did then. I'm so proud to have a been a part of this important work of art. It's 'timeless to me.' And so are the beautiful human beings I call my hairspray family. Your friendship truly does stands the test of time. We don't miss a beat and they cant stop the beat. I love you #ripdicklatessa #hairspray #hairspraythemusical #15years #goddoesntcountseattle

During her career, she has worked on plenty of television shows, as well as landing a country music record deal with Universal Records. Her album Achin’ and Shakin’ debuted at number five on the Billboard country album chart. Her hits include “Giddy On Up,” “Drop On By,” That’s What Angels Do,” and “Two Step.”

Throughout all of her success, she has always stayed extremely close to her family, which is why the past few weeks have been incredibly tough for her. Three weeks ago, she took to social media to ask her fans to pray for her Grandma Tibbie, but just one day later she informed her followers that Tibbie has passed away.

Grandma… thank you… for raising this family… for being the life of the party… for being strong… laid back… modest … brutally honest… bold. Thank you for all the laughter, your dirty jokes, your screwdrivers, peanuts, popcorn and cheezits. Teaching me to pray… and feel the presence of a higher power that guides my life… You bathed us, fed us, came to our games, meets, recitals, plays, concerts, opening nights… you name it. We felt supported and loved. I remember your red lipstick with the orange tint in the green tube. Your Clinique make up and your ponds cold creme. The smell of Georgio perfume. Your polka dot blouses. Salmon Croquettes sizzling in the cast iron pan. The smell of your rolls. The way you salted the tomatoes from the backyard. The way you served us before you ate. The was you surprised me with the truth like an assassin. The way you and grandpa danced in the kitchen or the way you blushed and got embarrassed if he made a fuss over ‘his bride’… ‘OH WAAAYYNE!’ You always ordered your steak well done and then said it was too done… until I went behind your back and told the waiter you really liked it medium. Thanks for stealing communion wafers for me to try. You said ‘it’s ok. They weren’t blessed yet.’ Teaching me the rules of basketball and how cursing during a game is ok if you’re also saying hail Mary’s right after. And if you leave and mop the floor when the score is down, it’s likely to go up. You were always a great comfort to me… not quite sure how life is going to feel without the sturdiness I felt with you in it —my rock and matriarch. I feel more groundless now… like the roots have been pulled up, but I’d gladly take that so that you’re souring and peacefully free. I miss you. I love you. ALWAYS. ‘I’ll be seeing you in all the old familiar places’ … ‘you embraceable you’ GO CATS! #rip #grandma #meemaw

As the matriarch of her family, Bundy says her grandma “raised our family with strength, humor, and unconditional love.” Tibbie was notorious for her polka dot blouses, red lipstick, loving to dance with her husband, and having a knack for dirty jokes.

A few days after her passing, Bundy shared a video of her grandma still telling jokes – right up until the end of her life.

Two weeks later, Bundy took to social media again to ask her followers to pray for her father, a man she calls her hero. His health was failing and was fighting for his life.

My hero needs your prayers and love. Much gratitude. #papa

Sadly, the update she gave on Tuesday (June 19) was not a happy one, as her father had passed away.

Papa. I never got enough time with you. Not ever. You used to joke that ‘house guests were like fish… they started stinking after 3 days…’ but not you… i would soak up our time together like a sponge. If there was a house and the guest was all my memories with you, I’d turn on all the the faucets slip into it’s structure and just drown myself in its joy. When someone truly knows you, and understands you… nothing is forced. It’s all just easy. Peaceful and free. You never get sick of them. It’s always a bummer when you part… cause being understood is rare. We understood each other. And we were always invested in each other… in creating these ‘wow’ moments we’d never forget. These moments of adventure where we were totally free , breaking rules together and living on the edge. Riding the ridges. Like a life lived where dessert was never a question. Key Lime pie. Party crashers were we … Taking over the dance floor, laughing at each other’s most truthful and off color jokes, … and yet so many tender moments I knew I was fully loved and totally safe.. in your teddy bear arms…the way you said’ I love you…’ never begged for a response… it was just certain and sturdy like you were. It repeats in my mind like the chorus coming up between the verses of today’s responsibilities. Those long and windy walk and talks… where my mind would open up and expand to new possibilities and realizations about life and the universe were my favorite… our footprints, on my my mind’s imprint. Boy did we ever self-help ourselves. ‘Oh Dad, I just read this great book you gotta read about creating boundaries and how doing that is actually being loving..’ and you’d say ‘Did you read ‘your erroneous zones’ yet?’ You’d say your real friends are the ones that come visit you in prison. Fortunately, you never tested that theory … but it’s true that they are also the ones that accept you as you are. Like you did me. You had this unique ability to make me believe you weren’t judging me so I never censored anything with you. Brilliant. You got way more out of me that way. I got to be fully authentic with you and I think you got to be fully authentic with

A true show business veteran, Bundy knows that “the show must go on.” She is currently starring in the Los Angeles production of Sweet Charity and opening night was Wednesday night (June 20).

“I know my dad and my grandma will be out there with the best seats in the house,” she wrote on Instagram.

As many of you know, I lost my grandmother and my father within the last 3 weeks… and it’s been well, pretty fucking brutal. But I’ve also had to rehearse a musical in 12 days… which is the shortest amount of time I’ve ever had to do that. A month ago, I had so much anxiety about learning this massive part in that short amount of time before I even could imagine or anticipate these losses. The amazing Kathleen Marshall has been a fairy god director and was so supportive of me missing two of our precious rehearsal days to say goodbye to my beloved father and to miss half of our first day of rehearsal to return from my grandmas funeral. The @reprise2la team and this ‘Sweet Charity’ cast has given me so much love and support I will never forget. Well, it’s the day of the show y’all. Opening Night … and this show must go on… just like life. But I know my dad and my grandma will be out there with the best seats in the house… And if any of you sweet friends who’ve asked me what you could do for me REALLY want to know what you can do… come see this show. It’s the highest mountain I’ve ever had to climb and would do me good to see you from that view. Thank you. #openingnight #angels (Info in bio)

Losing one member of your family is extremely difficult, but losing two in such a short time is unimaginable. We are praying for Bundy and her family during their time of grief.