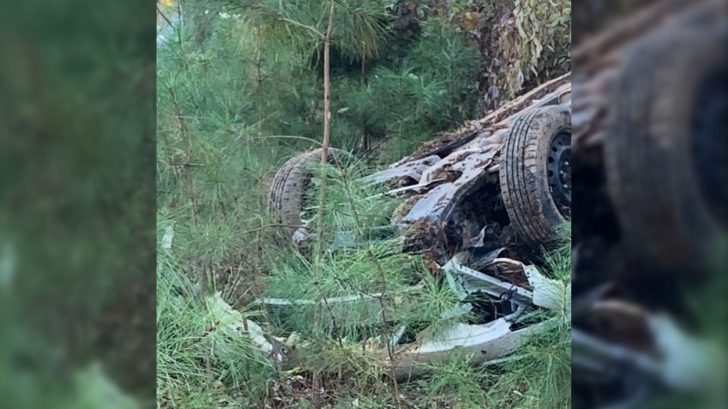 This near-fatal car accident was one of the most terrifying scenes a person could witness, but luckily a film crew and country star working nearby saw it unfold and were able to save multiple people from what could have been a very deadly situation.

On Saturday, November 17th, a crew working on the upcoming film Deep River that featured country music entertainer Ira Dean were able to rescue people in trouble after watching a terrible accident unfold right before their eyes.

“We heard the crash and I immediately took off running towards the car. I found it upside down and mangled with no driver in sight,” Dean told Jimmy Carter from WSMV News 4. “I heard screams from a woman and found her bloody and panicked. She was crying, ‘get him out’. “

Dean, a founding member of country music band Trick Pony, had been working on the film when he and several of the crew members heard the commotion occurring just beyond the filming location in Sanford, North Carolina.

As they reached the car wreck, which Dean described as “a car flipping through the woods,” he saw a woman bloodied and panicked who was crying out for someone to help her passenger that happened to be trapped amongst the wreckage.

“Fellow actor Eric Hamilton and I quickly rushed to open the car doors, but they were both jammed. I finally climbed through the back to reach him,” Dean continued. “It took four of us from the movie crew to get him to safety. Then the woman suddenly lost consciousness.”

Fearing the worst for the woman’s well-being, Dean and his fellow workers were scared that she may not make it until help arrived. Moments later, first responders were on site and able to stabilize and treat both passengers.

A visibly shaken Ira Dean posted a video in the aftermath of the wreckage explaining how lucky these folks were to be alive. In the background of the video, you can see emergency vehicles and the remaining wreckage in the woods just off the highway.

We are so glad that these folks were okay and that people like Dean were nearby and able to help in such a heroic way! A true blessing.

We are praying for a speedy recovery. Watch Ira Dean’s full video below.

DAILY UPDATE Living up to the name THOR