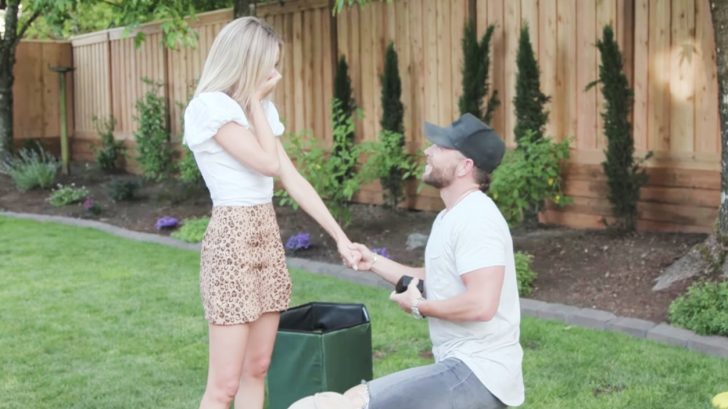 Country singer Chris Lane just announced his engagement to former Bachelor star Lauren Bushnell. “I got some Big, Big Plans for us,” he wrote.

I got some Big, Big Plans for us @laurenbushnell ? Thank you @people for helping tell our story. Link in IG story

“Big, Big Plans” is the title of the song he wrote and used to propose to his girlfriend, who he’s been dating since the Fall of 2018. The two made their debut on the red carpet at a BMI event in November, and have been inseparable ever since.

Bushnell, who gained fame when she became engaged to Ben Higgins during the 20th season of The Bachelor in 2016, moved to Nashville from Los Angeles in March.

In the video for “Big, Big Plans,” which Lane released to his official YouTube account on Tuesday (June 18), he gives a little introduction to the song to Bushnell at her family’s Oregon home.

“Some of y’all know that I’ve been working on a song for Lauren. I just got t back today, so while we have the cameras here, I want to capture this moment of me playing it to her for the first time,” he said before pressing play on his phone.

Once the music started, a video montage of all their fun times together began playing. Occasionally, it cut back to the couple hugging and dancing to the meaningful song. During a verse, he sings, “Right now we’re back in her hometown / and I’m down on one knee,” and once Bushnell realized it, she was in tears.

Lane then pulled her onto the grass where he got down on one knee to ask her to marry him, and of course, she said, “Yes!”

You can here her family cheering in the background. The engagement took place on Sunday (June 16), and went off without a hitch. Well, actually there was one small issue.

“As I was about to propose… I stepped in fresh dog poop with my bare feet,” Lane told PEOPLE.

Lane gave her a gorgeous 3.5 carat emerald-cut diamond with a dainty band. See it below.

I can’t stop smiling ? I feel so incredibly blessed that every misstep, mistake and heartache has led me to you. I couldn’t be happier to call you mine, forever. The journey was well worth it. Thank you Christopher Eric Lane for softening my heart and making it whole. Never going to stop telling you how much I love you and I will hold onto you forever and ever! Lauren Lane has a nice ring to it ? PS he wrote me a song ? I linked in my bio for y’all. I can’t stop listening or looking down at my hand ? thanks @people for covering ?

Watch their proposal in the video below.