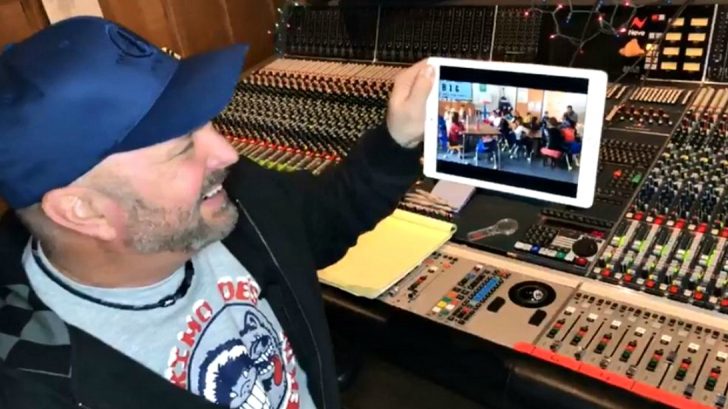 A third grade teacher from Iowa is making headlines after getting an epic shoutout from Garth Brooks via Facebook. Brooks goes live on Facebook every week in a series that he calls Studio G that gives fans a chance to connect with the “If Tomorrow Never Comes” singer.

During his Studio G segment Monday night (March 26), Brooks mentioned a video that had been brought to his attention in which CJ Gaston, a teacher at Van Buren Elementary in Douds, Iowa, was leading his class in a sing-along of Garth’s hit “Ask Me How I Know.”

Brooks played a portion of the video for his viewers then applauded Gaston, saying, “Teaching our children is the greatest gift, thank you for doing that. It’s probably one of the most under appreciated gifts, along with serving our community – the men and women in blue and the firemen and first responders. Thank you for your gift. And, dude, you sound great! I can’t believe you sound like that and you do teaching and that’s very cool.”

We agree with Garth that Gaston has some serious singing chops, so it will come as no surprise that the talented teacher has a country music background. Gaston shared with Country Rebel that he spent 2 1/2 years singing in Nashville. “I actually played for Tootsies, Honky Tonk Central and Rippys on broadway for 2 1/2 years. I fronted a band called Third Wheel,” he said.

It was during his time in Nashville that Gaston met singer-songwriter Mitch Rossell. Rossell wrote the Garth Brooks single “Ask Me How I Know” and it was gaining in popularity when Gaston moved back to his Iowa hometown to teach. One day, Gaston played the song for his third grade class and told them that he knew the writer of that song.

“They thought that was pretty cool so every time there was a chance for me to play some songs for them they wanted [‘Ask Me How I Know’],” Gaston said. “Then they all started hearing it at home on the radio and coming to school and telling me about it, so it became pretty popular with the kids. Every time time I play it now they sing it just a little bit louder.”

The kids’ enthusiasm is evident in the full video that was posted to Facebook by CJ Gaston after his epic shoutout from Garth Brooks Monday night. One little boy in the back of the room caught our eye as he danced and sang along to every word. The same boy caught Garth’s eye and he commented, “There was one kid in the back that was so me. He’s sitting there dancing and doing all this stuff…it was so me as a kid. It was great.”

Watch the full video for yourself below and help us give major kudos to teacher CJ Gaston and his talented class by sharing!