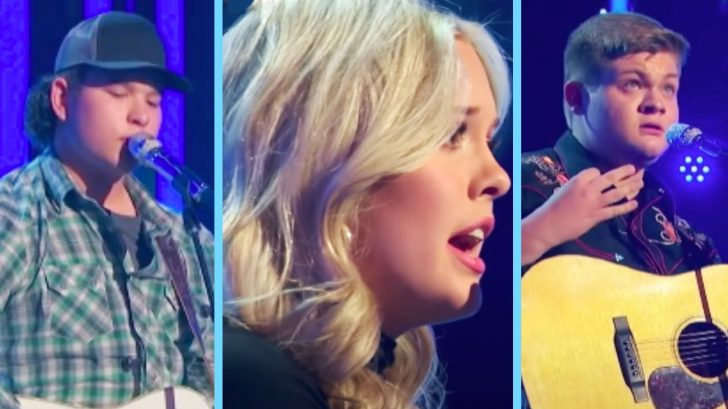 The judges make a lot of cuts during Hollywood Week. They want to make sure only the best of the best contestants continue on in the competition and advance to the live shows to earn viewers’ votes.

During the first episode of Hollywood Week during the 2021 season, the contestants were separated into groups based on genre. By grouping the contestants this way, the judges could directly compare similar artists to each other in order to see who has the most potential.

One of the genre groups was country. When Idol packaged the performances together on its YouTube channel, they showcased three country performances in one clip.

The video shows country-singing contestants Caleb Kennedy, Cameron McGhar and Alex Miller. 16-year-old Kennedy took the stage first, and performed a cover of “Whiskey and You,” which was written by Chris Stapleton. The song has also been recorded by Tim McGraw and Aaron Lewis.

His passionate performance won the judges over, and he advanced to the next stage of the competition.

Then, 16-year-old Cameron McGhar aimed to impress by covering Sugarland‘s emotional single from 2006, “Stay.” If you recall, McGhar was the artist who delivered a “rocky” cover of Little Big Town‘s “Girl Crush” during auditions. The judges gave her a second chance, and she finally earned two “yes” votes and a golden ticket by singing Loretta Lynn‘s “You Ain’t Woman Enough.”

Her “yes” votes came from Luke Bryan and Katy Perry, who both knew they were taking a gamble on the young artist. As they listened to her sing “Stay” during Hollywood week, it became obvious they didn’t think she was ready to advance any further on the show. She was later eliminated.

Last but not least, the video features a performance from 17-year-old Miller, who sang the bluegrass staple “Freeborn Man.” The judges were amused by his energetic stage presence, and opted to send him through to the next round of the competition.

You can watch snippets of all three country contestants’ performances in the video below. We’re sad to see McGhar go, but wish Kennedy and Miller the best as they keep chasing their Idol dreams!