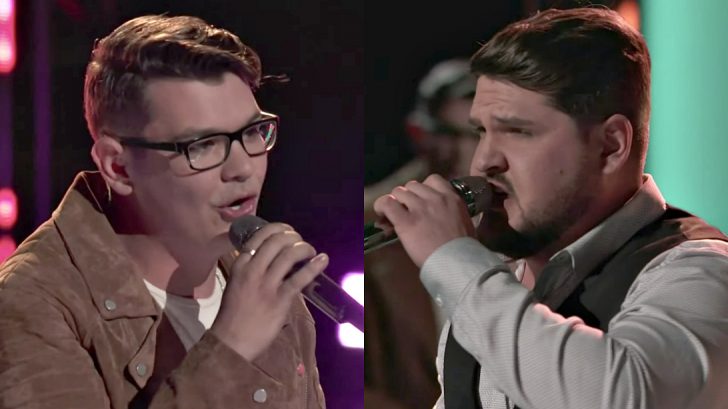 After sixteen seasons, The Voice has shaken things up with a new battle round of competition. Similar to the show’s Knockout Round, the new Cross Battles pit two singers against each other as they sing a song of their own choosing. But, unlike the Knockouts, the Cross Battle contenders compete against vocalists from an opposing team. The result was round after round of epic sing-offs, including a country battle that put Blake Shelton and Adam Levine’s rivalry to the test.

During Monday night’s Voice episode, coaches were able to choose a singer from their team and reveal which team they wanted to challenge. When Blake Shelton chose for his country front-runner Dexter Roberts to challenge a member of Adam Levine’s team, it was a no-brainer for Levine to put up his best country singer, Andrew Jannakos.

Roberts is no stranger to a singing competition stage. The talented Alabama native was a finalist on the thirteenth season of American Idol, ultimately placing 7th. His experience paid off when he took the stage during the Cross Battle to perform “Believe” by Brooks & Dunn.

Jannakos, who had never performed on stage as a solo act prior to his Voice Blind Audition, held his own with a stirring rendition of Russell Dickerson’s “Yours.”

Coach Blake Shelton praised his protege’s performance saying, “You brought it. Dexter, that song you performed is sacred ground in country music. That song is one of their greatest in my opinion. The way you performed it, you made it your own, but you did it justice. You made it stand out. It was absolutely pitch perfect.”

Levine argued that Andrew gave Dexter a run for his country money. “I want to talk about the fact that, Andrew, you got up here and there might not be anybody more country than Dexter. You’re countrier than he is.”

Thankfully, the decision isn’t up to the judges. America’s vote will determine who stays and who goes as the field of 32 is reduced to 16 during the Cross Battles. Tune in Tuesday night (April 16) to see the results from Monday night’s battles.