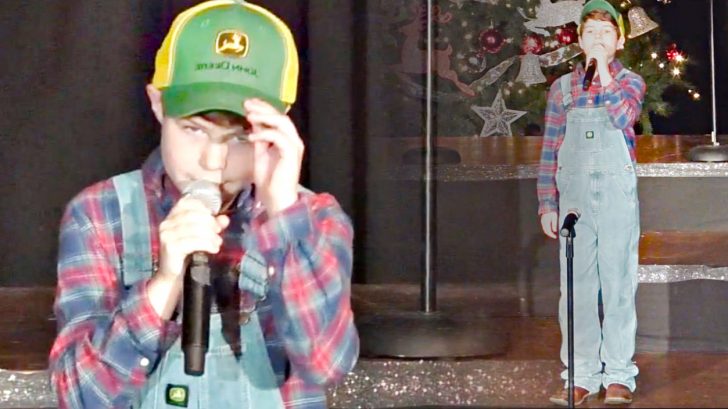 During a holiday recital for Tennessee’s Kincaid-Gooch Voice Studio, one boy stole the show with his “Leroy The Redneck Reindeer” performance. After watching him sing and dance the whole way through, you’ll be wondering why Rudolph gets all the credit!

While most kids would stick to the traditional “Deck The Halls” type music, young Luke of Alamo, TN decided to take a more country-fried approach for his holiday performance. Singing Joe Diffie’s 1995 Christmas tune, “Leroy The Redneck Reindeer” was a risky choice…but it looks like it might have paid off.

As Luke stood on stage, you could tell he was excited to debut his redneck jam. He was country from head-to-toe with his John Deere trucker hat, overalls, and square-toed cowboy boots. The piano started playing in the background and Luke patiently sang the first few lines of the tune.

All of a sudden, Luke jumps into the upbeat song and brings a whole new life to each word in the song. His sweet smile and fun attitude was a total hoot to watch!

Obviously, his stage presence got the crowd going. From clapping and stomping along to a roar of applause at the end – everyone watching knew they were seeing something great unfold!

We see big things in this kid’s future. He might just be the next Joe Diffie! Check out his performance below and let us know what you think in the comments.