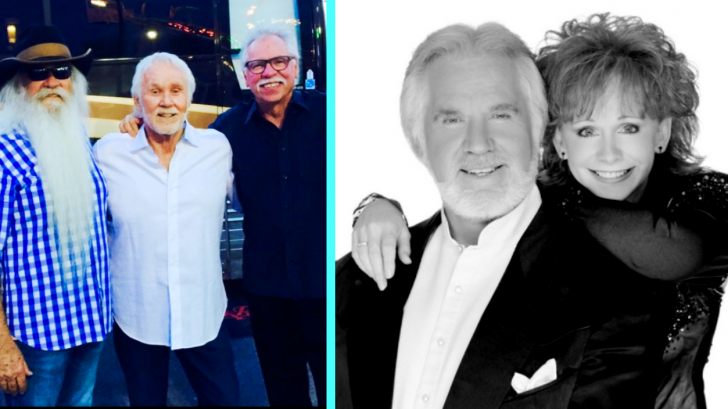 Country music just lost one of its legends…Kenny Rogers.

Rogers’ family issued a statement on social media saying that “The Gambler” singer passed away on Friday (March 20). He was 81 years old.

“Rogers passed away peacefully at home from natural causes under the care of hospice and surrounded by his family,” the statement read.

The Rogers family is sad to announce that Kenny Rogers passed away last night at 10:25PM at the age of 81. Rogers passed away peacefully at home from natural causes under the care of hospice and surrounded by his family. https://t.co/adxAgiMW2s pic.twitter.com/nggWiiotMT

Rogers retired in 2017 after enjoying a decades-long career. Although he started off singing songs that were more rock-leaning, he was primarily known for being a country singer.

He was a member of the Country Music Hall of Fame, received three Grammy Awards, and had 24 chart-topping hits. Just a few of those hit songs include “Islands in the Stream,” “Lady,” and “We’ve Got Tonight.”

Rogers collaborated with many other country stars over the course of his career, including Dolly Parton, Ronnie Milsap, Alison Krauss, and Dottie West.

Needless to say, the country music community was devastated when they woke up on Saturday morning (March 21) and learned that Rogers passed away. Many artists took to social media to pay tribute to Rogers with pictures and kind words.

You can see some responses to Rogers’ death below. We have included posts from artists as well as some venues and organizations relevant to the country music community.

I’m going to miss my sweet friend that I’ve known through the years. I love you Kenny! ❤️?❤️

One of the greatest examples of integrity I have ever known. He was always so very kind to me. Wow. Life is so bittersweet…

We were fortunate enough to host "All In For The Gambler" in 2017 – a tribute to #KennyRogers.

It was evident then how many lives were positively impacted by Kenny and his music, and it's even more apparent today as the world mourns the loss of this legend.

Kenny, Go rest high on that mountain. Please tell mama and daddy hi for me. Thank you for your friendship and your love. We are going to miss you but we are so happy you’re singing with the Angels in heaven. Can’t wait to see you again one of these days. Rest in peace my friend.

Country Music legend @_kennyrogers decorated our lives with incredible music and memories. Our thoughts are with his friends and family.

I can’t express on twitter the impact Kenny Rogers the artist and the man had on me. He was always very kind and fun to be around. Rest In Peace Gambler…

So many songs you sang painted the canvas of my musical youth. Thank you for dedicating your life to enriching the lives of people like me with your gift. Rest well Sweet Music Man. @_kennyrogers

The Country Music Hall of Fame

"Kenny Rogers is, of course, one of music's most successful and enduring artists. His uncanny song sense and impeccable singing resonated across the genre lines that he took delight in ignoring. The antithesis of a gambler, he thought deeply and acted deliberately with every career decision, and those decisions brought to light the songwriting talents of Hal Bynum, Mickey Newbury, Don Schlitz, and many more. Though he was by any definition a superstar, he lived a life of service to songs, writers, and, above all, listeners." – Kyle Young, CEO

The loss of The Sweet Music man will take a long time to process Kenny like CASH was always bigger than life to us and no other has meant more to our career. Thank you Kenny for the lessons love, music and deep friendship … until the day .. #RestinpeaceKennyrogers pic.twitter.com/21aslusOKp

I’m so very sad to learn that @_KennyRogers has passed away. Kenny was a friend who helped me in so many ways early on. He was always funny, kind and full of advice. He encouraged me to always challenge myself and gave me many opportunities to do so onstage and even in movies. Although he is gone, his music will live on forever in the hearts of his fans. My deepest condolences to Wanda & family. #RIPKennyRogers

Country Music has lost the great Kenny Rogers, who has forever left a mark on Country Music's history. His family and friends are in our thoughts during this difficult time.

Lil tribute to The Gambler @_KennyRogers … one of my favorite songs ever. pic.twitter.com/Y9JmILrjG8

What an amazing journey Kenny Rogers had. I had the pleasure of visiting with him several times over the years. He was always very gracious to me. His music touched me from an early age. I remember my great aunt Lucille paying me a quarter to sing Kenny’s "Lucille" to her when I was 7 or 8 years old. I’ve always considered that my first paid performance. His music and movies will always be a part of us. Rest in peace my friend.

We were so saddened to hear of the passing of Kenny Rogers. We’ll never forget the day we got the phone call that Kenny wanted us to be on his Christmas album. We cherish the memories we made with him, and the lessons he taught us. He treated all people with such grace, cared deeply for his fans, and was above all a wonderful family man. He was truly one of a kind and he will be dearly missed. Rest In Peace, Kenny Rogers.

‪A Giant. A Legend. The voice we all sangalong to, and always will. One of the great honors of my life was hosting the “All In For The Gambler” tribute to Kenny Rogers at the Bridgestone in 2017. It blesses me to remember how much love was showered on him that beautiful night. My deepest condolences go out to his wife Wanda, and to all his friends and family. Rest In Peace, Kenny. Thank you for decorating our lives.✨ #ripgambler

What a great man. You will he missed #kennyrogers . This was from 2009 when @ladyantebellum got the opportunity to open up a show in Switzerland for Kenny. He really opened the door for us and touring internationally.

So sad to hear the news of @_KennyRogers passing. Love and prayers to his family. #Gambler #SoManyMemories pic.twitter.com/tTTFBy6MRi

I grew up listening to @_kennyrogers as most of us did.. loving his movies as well. I didn’t understand just how cool he really was until I met him when I opened up for him at a Casino in the middle of nowhere. It was an Arena show filled to the rafters. I watched every move he made on stage and was blown away by his voice, comedic timing, and how he would just simply talk to the crowd and bring them in as if they were part of the show. A True Legend. But most importantly an Amazing Man!! This video encompasses how special Kenny was with all of his fans. He will be missed!!R.I.P

Amid such crazy times, we’ve lost another legend. So sad to hear of Kenny’s passing this morning. He was a real life hero, and he’s left his stamp on all of music-not just country-forever…. Rest In Peace my friend…. #kennyrogers #rip #losingalegend

I woke up this morning to the news that Kenny Rogers passed away. The first concert I ever attended was his back in the early 80’s and it forever changed my life. I had the pleasure of meeting and talking to him a few times over the years and I am so grateful to have spent a few moments with him. He was an icon that helped bring in a whole new audience to country music and he forever changed the game for all of us. He will always be missed and remembered….. R.I.P. Gambler

Country music has lost one of its pillars…sing with the angels and talk to God, Kenny. Bless you for being a part of so many lives… pic.twitter.com/QSUGLnVutD

This is one of my favorite songs since I was young. It was written by Mike Settle and Kenny Rogers had a big hit with it in the late 60’s. Me and a few of my band members did this very quickly in my studio years ago. I thought it would be a nice tribute to Kenny. Rest in peace Gambler. Kid Rock. (See Facebook for full song version)

Kenny, there will never be another like you. Thank you for the music. ? @reid_long

Just my small way of remembering @_KennyRogers. This is a song that Kenny wrote with Waylon Jennings (another musical hero) in mind. #RIPKennyRogers #RIPLegend #RIPLegend pic.twitter.com/zEjHHLiWKA

Rest In Peace Kenny Rogers. We loved you. #kennyrogers #sweetmusicman

One of the most heartbreaking reactions to Rogers’ death came from his frequent duet partner, Dolly Parton. While clutching a photograph of her and Rogers in her hands, Parton spoke to her fans in a video she shared on social media:

“I loved Kenny with all my heart…And my heart is broken,” she said. “A big ol’ chunk of it has gone with him today. I think that I can speak for all his family, his friends, and fans, when I say that I will always love you.”

You can watch Parton’s response to Rogers’ death in the video below.

We too, join Parton in sending our prayers to Rogers’ family and friends. May he rest in peace.

You never know how much you love somebody until they’re gone. I’ve had so many wonderful years and wonderful times with my friend Kenny, but above all the music and the success I loved him as a wonderful man and a true friend. So you be safe with God and just know that I will always love you, dolly.