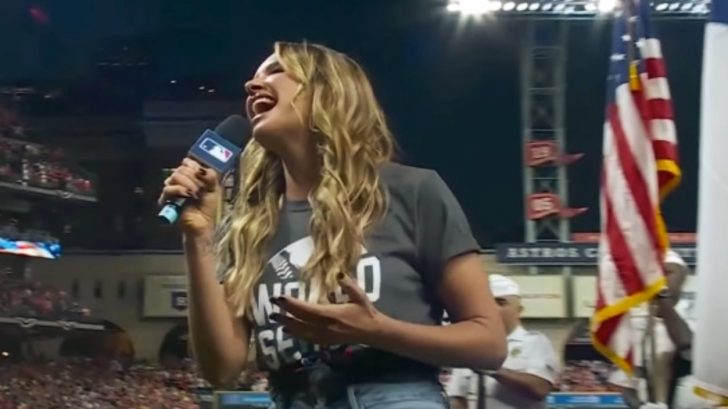 Carly Pearce has experienced one dream-come-true moment after another this year. It all started when she won two ACM Awards for her collaboration with Lee Brice, “I Hope You’re Happy Now.”

Then in June, Dolly Parton surprised Pearce with an invitation to become a member of the Grand Ole Opry. She was officially inducted in August.

In September, Pearce released her latest album, 29: Written in Stone. The album was met with rave reviews, and reached the ninth spot on the Billboard Country Albums chart.

To add to her already exciting year, Pearce was asked to perform the National Anthem before Game Six of the World Series. After she sang, Pearce spoke on social media about how much that moment meant to her:

“Few things are as American and iconic as the World Series… like singing at the @opry , this is one of those things you don’t dare dream — and almost can’t believe when it’s actually happening. Thank you @mlb for giving me the honor of singing the National Anthem tonight.“

Pearce sang the National Anthem a cappella, giving her voice the chance to stand out and shine. She earned lots of praise from her followers on Instagram, who felt she did a fantastic job.

Pearce also received supportive comments from the Opry and CMT.

If you missed Pearce’s performance of the National Anthem at the World Series, check it out in the video below. She’ll never forget this moment!