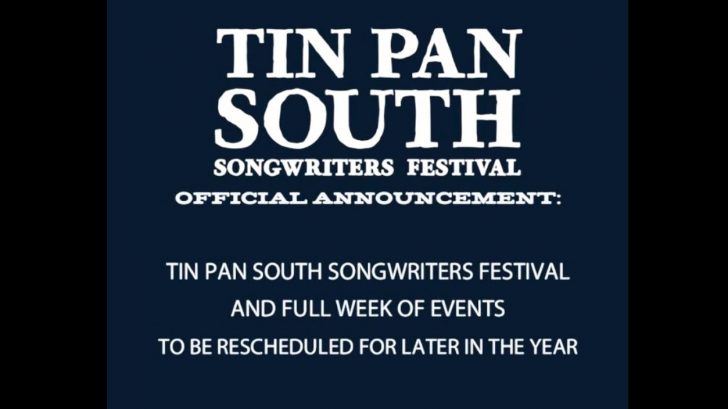 A popular songwriters festival in Nashville has now been postponed until summer for more than one reason.

The festival was supposed to take place from March 24-28 at ten different venues in Music City.

Seminar is getting even sweeter! We are excited to announce that this year’s Tin Pan South Songwriting Seminar is powered by Sweetwater Sound! Don’t miss out on this 2-day event featuring 30+ industry professionals. Spots are limited, so register at https://www.nashvillesongwriters.com/tin-pan-south-songwriting-seminar-2020 Seminar attendees, don’t forget to check your e-mail on early access to Fast Access Passes!

However, the show will not go on as planned.

On March 3, a powerful storm tore through Nashville and middle Tennessee. The storm, which produced a tornado, left two dozen people dead and destroyed numerous homes and structures.

Nashville and many of its businesses remain in ruin. The cleanup efforts within and outside of the city have been extensive.

A deadly tornado struck the Nashville area in the early hours of Tuesday. https://t.co/SPsh3yBf8p pic.twitter.com/P1QHkNRm64

That would have been reason enough to consider moving the Tin Pan South festival to another date. But something else served as further motivation for festival organizers to postpone the event.

Two days after the tornado struck (March 5), Tennessee announced its first confirmed case of coronavirus in the state. The 44-year-old man who contracted the virus is from Williamson County, which sits just below Davidson County, where Nashville is located.

Concerns around coronavirus are at an all-time high worldwide, prompting many large events to consider cancellation or postponement. The SXSW film festival in Texas canceled over coronavirus concerns, and there has even been talk that the 2020 summer Olympics in Tokyo may be canceled.

Citing coronavirus concerns and the tornado damage as factors, Tin Pan South officials announced on Friday (March 6) that the festival will be postponed until the summer:

“After heavy consideration, in light of the tornado this week as well as growing health concerns over the coronavirus, we have decided to reschedule Tin Pan South Songwriters Festival to later this year, in the summer,”  said Bart Herbison, the Executive Director of the Nashville Songwriters Association International (NSAI), in a press release. “We feel this is the responsible decision, and it is supported by Tin Pan venues and sponsors involved in the festival.”

Tin Pan South Songwriters Festival and full week of events is being rescheduled “in light of the tornado this week as well as growing health concerns over the Coronavirus," said NSAI Executive Director Bart Herbison. This decision was made with heavy consideration and with the support of Tin Pan venues and sponsors. For the full statement, click the link in the bio

The press release indicated that some of the events may still take place at each venue’s discretion. There is the potential for some of these events to transform into benefit shows for tornado relief.

We’re sad to hear that Tin Pan South won’t take place as scheduled, but certainly understand the reasons. Our hearts and prayers remain with the people of Tennessee as they continue to rebuild following the tornado.