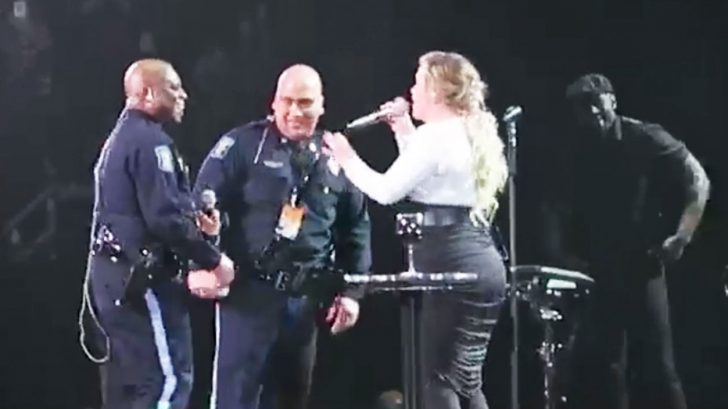 Ever since Kelly Clarkson kicked off her Meaning Of Life Tour in late January, the shows have been newsworthy. From her breaking down during “Piece By Piece” to effortlessly covering a Miranda Lambert ballad, we thought there was nothing this powerhouse couldn’t do. Well, at her most recent concert, she gave fans a treat they never saw coming!

At her Kansas City show, Kelly brought out some unlikely friends for a duet of a lifetime. In full uniform stepped out two Kansas Highway Patrol officers ready to give their fellow citizens a show! The two male officers took over the stage to sing the classic, “Stand By Me.” One thing is for sure – there was no lack of energy from the fans or the performers.

Kelly let the officers guide the crowd as she stood back and sang the harmonies. One officer danced around the stage like he was born to be there. Halfway through the song, you can see the entire arena standing up and singing along. Kelly even took a couple sips of wine while cheering on the talented men.

Following the performance, Kelly asked one of the officers the story of how he met his wife – which just happened to be in a similar fashion.

The officer proceeded to tell the audience that he met his wife while singing an Earth, Wind, and Fire song at a karaoke bar. Kelly even made a joke admitting that she now totally understands why his wife chose him that night!

“You were so into it!” She continues, “This is a beautiful song too that brings people together. I feel like there is such a separation sometimes between the community and the cops and there shouldn’t be! This a beautiful thing happening. I love it!”

The crowd went wild in applause as they appreciated these phenomenal officers and their brave souls.

Although we’re thankful for their service, we think they should take up a second profession in singing!

Watch the show-stopping duet below.