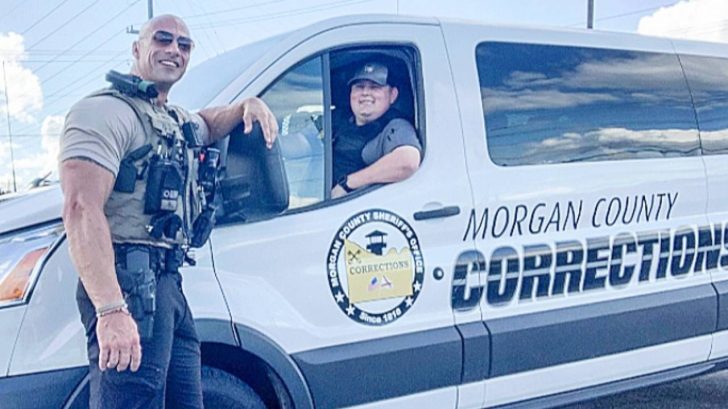 Dwayne “The Rock” Johnson has acted in plenty of movies where he plays a law enforcement officer including Walking Tall, the Fast and the Furious franchise, Central Intelligence, and Skyscraper just to name a few.

After the Morgan County Sheriff’s Office in Alabama posted a photo of one of their officers, it went completely viral for one reason. And that reason is because the officer looks like Dwayne “The Rock” Johnson’s twin!

When we first saw this photo, we had to do a double take and make sure this wasn’t a photo from the set of Johnson’s upcoming new movie! Someone on TikTok saw this photo and made a video about it, which had hundreds of people going to the Sheriff’s Office Facebook post.

“TikTok sent me here,” lots of people wrote on the photo, while others made jokes and said, “This is not The Rock, this is The Boulder.”

The man’s name is Lieutenant Eric Fields, and he is a married to a nurse named Wendy and they have two small children. He even has a tribal chest and shoulder tattoo, just like The Rock!

Lt. Fields has become so popular online that when a citizen ran into one of his co-workers, they requested to meet Lt. Fields!

Check out some more photos of Lt. Fields that will make you double take!