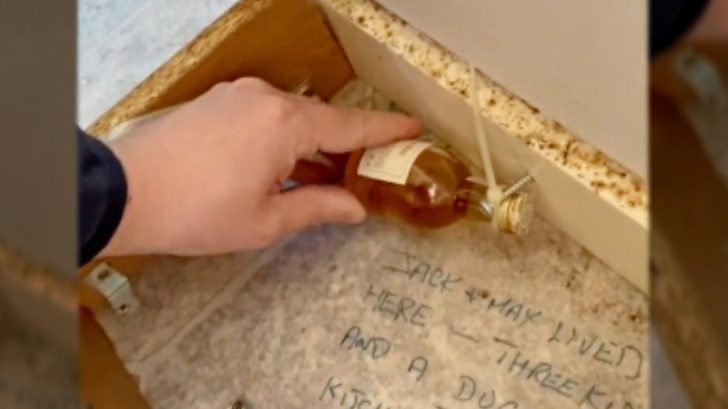 Craig Harrigann specializes in kitchen and bathroom renovations, and it’s safe to say he has probably encountered a few strange things in his clients’ homes.

Last week, Harrigann was in the middle of remodeling a kitchen when he discovered a note and a bottle of whiskey. The homemade time capsule was left behind by the previous owner, who clearly had a liking for hidden treasures and Glenkinchie whiskey.

Harrigann, who lives in Scotland, posted the curious find in a now-viral video on TikTok. In the video, social media users can see a note written on the floor. The small bottle of whiskey appears zip-tied to a nail on the wall. In the clip, Harrigann provides viewers with background on the situation before reading the note out loud.

“Jack and me lived here — three kids and a dog. Kitchen done up during April-May 2001. All the best. Have a drink on us,” Harrigann read.

According to The Sun, when Harrigann called the owner inside to look at the twenty-year-old message, the story came full circle. The client was one of the children mentioned in the hidden message. Still, the customer had no idea that the piece of history existed inside the house.

For more on hidden time capsules and whiskey, check out the next video.