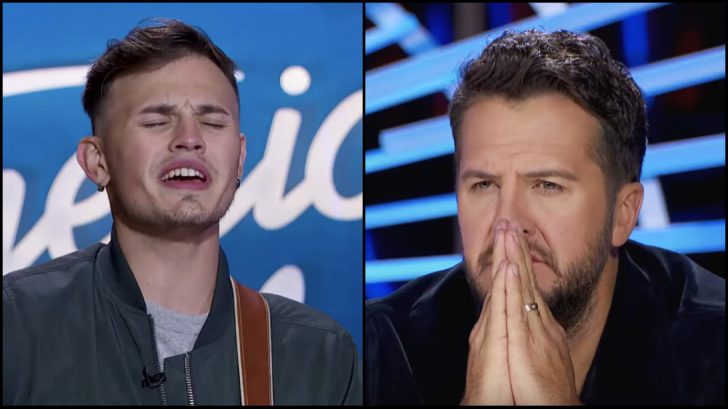 In what was arguably one of the most emotional American Idol auditions in the show’s history, Nick Townsend shared his heartfelt story of unimaginable loss and brought the judges (and the rest of America) to tears.

The 25-year-old Tekamah, Nebraska, native stood before Idol judges Lionel Richie, Katy Perry and Luke Bryan during Monday night’s season premiere and shared his heartbreaking story of loss. When asked why he is auditioning for the iconic reality singing competition, Townsend replied that he was doing it for his brothers.

“Me and my older brother Zach were only three years apart,” Nick explained. “Zach joined the Air Force and was a crew chief for F-16s. It was the most pride anyone could have. I was like ‘That’s my big brother.'”

While working in Los Angeles, Nick got a call that would change his life forever. “I got a call from my dad. My dad said they had lost Zach.” His father went on to explain that Zach had taken his own life.

Following Zach’s death, Nick had the opportunity to move to Japan. The trip was a welcome one for Nick who “just wanted to feel something again other than pain.” While in Japan, Nick got another phone call letting him know that his little brother, Matthew, had also taken his own life. “Going to Japan is the biggest regret I’ve ever had in my life,” the singer said. “It made me feel selfish, you know? Because I left my little brother when I could have been there.”

All three judges fought back tears as Nick shared his heartbreaking story, and all were immediately drawn in when he began to sing “Let It Go” by James Bay. Following his performance each judge offered their heartfelt condolences, but only Luke Bryan has suffered similar loss and could relate to Nick on a personal level When Luke Bryan was just 19 and preparing to move to Nashville, his older brother Chris (26) was killed in a car accident. In 2007, tragedy struck again. Bryan’s sister, Kelly, died unexpectedly while at home with her young son.

“She was home with her 3-year-old, and it was like someone turned the lights out. They never determined what happened. The autopsies, the coroner, no one could figure it out,” Luke told PEOPLE in 2013.

Bryan, who rarely speaks about the death of his siblings, addressed it with Nick, saying, “I haven’t brought this up on this show because I haven’t had to. But, as somebody who’s…I’ve lost both my siblings. I just applaud you for keeping a positive attitude and continuing to fight and just try to be a light for your parents.”

It’s no surprise that Nick received a coveted golden ticket to Hollywood as he delivered one of the most beautiful auditions of the night.

Luke Bryan took the time to give Nick and his parents some more crucial advice following the audition. “You know what you gotta remember? It’s alright to cry good tears,” Luke said to Nick’s father before turning to his mother. “Remember fun, happy, good, good days. Alright?”

If you or someone you know is struggling with thoughts of suicide, please contact the Suicide Prevention Lifeline by clicking here or calling 1-800-273-8255.